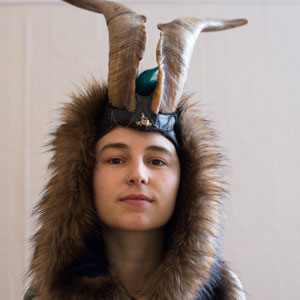 Jessica Sallay-Carrington's work focuses on the representation of femininity and the role of gender and sexuality in modern society. Jessica’s work showcases her lifestyle as a queer, polyamorous, non-binary femme, thus using the pronoun “they/them” as well as “she/her.” Through ceramic sculptures, Jessica questions gender expectations and stereotypes and how they influence personal identities. Their animalistic qualities speak for the subconscious parts of human action, blurring the line between human and animal. Jessica uses her sculptures to fight for gender equality and aims to develop a revaluation of what defines 'feminine' in contemporary society.

Jessica Sallay-Carrington is a queer ceramic artist living in Montreal. In 2014 Jessica moved from Vancouver to Montreal, Canada where she received her BFA in ceramics at Concordia University. Jessica continues to produce work in her studio and actively pursues artistic travel opportunities. Attending artist residencies has brought Jessica to Greece, Italy and Denmark, Maine and Virginia of the USA, as well as both the East and West coast of Canada. Jessica has been part of many group exhibitions around Canada and the USA as well as one in Italy. She has had three solo exhibitions in Canada, with a fourth to occur in 2019 after her residency on Canada’s west coast. Throughout Jessica’s career she has won four awards for her sculptures and received one grant to attend a residency in Italy. She has also been featured in multiple publications including the TV show CBC Exhibitionists, New York’s ArtTour International Magazine, and a book of 80 contemporary ceramic artists commissioned by The Pyramyd Publications being released in October 2019. She is currently working on a ceramic series depicting gender diverse people to spread awareness of issues surrounding gender and sexuality.