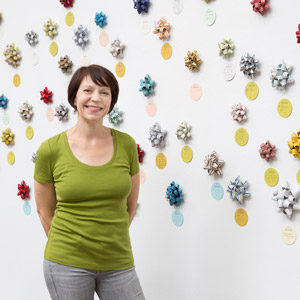 The permanent nature of ceramics lends itself to containment of many sorts. My works contain divergent qualities; sweetness and sadness, lightness and weight; tangible reminders of life's plain and simple joys, as well as life's bittersweet attendants – impermanence and loss. An ice cream cone, a gift bow, an old stuffed toy or the temporary moment a bird alights upon a snowball; each image made permanent embodies an ephemeral quality I seek to capture and hold still for.

I’m influenced by poetry, where relationships between words/images shift and coalesce in such a way that something fresh or exciting is felt; what once felt common suddenly feels uncommon, what initially appeared ordinary strangely moves us. If, for a small moment, a configuration of objects I have arranged can be held onto as meaningful in a similar way- my work has achieved its aim.

Made for Baton Rouge Gallery, May 2018

Fellow artists often encourage fellow artists to experiment. As a member of the Baton Rouge Gallery artist cooperative, the standing invitation to try something new- even slightly different- within the gallery space, has always felt both compelling and risky.

Words are often the first threshold I cross when considering a new body of work. Starting from where I found myself; grateful to be in mid-life, (mostly) joyful, with kids, a great job- and yet wrestling, too with commonplace, mid-life fears, doubts, Facebook- basically, life’s ordinary responsibilities and obligations; the word “bound” in all its permutations, spoke to me:

To be firmly determined, resolved, to intend to go, or to move by leaping.

Something secured in place.

A point or line beyond which a person or thing cannot go.

To be both going somewhere as well as tied to one place…?.

I spend a good deal of my time trying to make meaningful objects with my hands. It is what I have dedicated my adulthood to and it is why- ultimately- I ended up living in Baton Rouge. Much in the way a plumber fixes a sink or my daughter’s teacher explains fractions, creating is one facet of how I contribute to my community. “Bound” stemmed from a simple desire to give of what I know and value, as much acknowledgment and appreciation for what others do and bring.

Over the past several months I made 120 ceramic bows to gift to others and to BRG. Kathryn Hunter, the owner of local Blackbird Letterpress donated the colorful tags on which people wrote special messages to their recipients. Prior to the show, on a small group of tags I wrote a concise message to a 20 people (some I know, some I don’t- from public school teachers to preachers) whose contributions to Baton Rouge I have admired, valued and appreciated. In turn, I provided each recipient 2 additional tag’s to pass on to others in the same spirit, much like a chain letter. All of these tagged recipients got to choose one bow as a gift- simply by hanging a tag by it.

Colored ribbons serve as symbols within our culture, visual reminders of what people support, value or believe in. This project embraces that idea, my hope is to create a veritable constellation around our community- one suggesting the many ways in which we all are, or can be – bound.

Michaelene/ Mikey Walsh received her BFA in Crafts from the University of Illinois at Urbana- Champaign and her MFA from the New York State College of Ceramics at Alfred University, NY. She has held teaching positions at Massachusetts College of Art, the University of Georgia, the University of Washington, Virginia Commonwealth University and U-C-Davis in addition to instructing Haystack School of Crafts, Anderson Ranch Arts Center, Arrowmont and Santa Fe Clay. Currently, Mikey is the Associate Director and Professor of Art at Louisiana State University. She has been the recipient of two Louisiana Division of the Arts Individual Artist Grants. Her sculptural and functional ceramic work is exhibited internationally and is also featured in the publications The Figure in Clay by Lark Books and The Human Figure in Clay by the American Ceramic Society. She lives in Baton Rouge with her husband and two children.