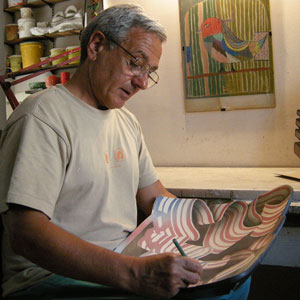 The fantastic process of materializing the idea through a final work always fascinated me and pushed me to be curious and to go on.

In my work I have passed through changes and diferent phases. Lately, and for some period now, the pictoral problems I have been trying to solve are: (1) to unify form with illusionary painted parts, and (2) to unify the solid parte of sculpture with more fragile ones within unique shapes.

This approach demands rational advance planing of the construction, and concentration to imagine how, many different and separatly made parts or painted parts, are going to look like once joined together.

I enjoy playing with our perception and posing absurd riddles. Is that what we see or is it skillful illusion?

Velimir Vukićević was born in Belgrade in 1950. His father was a ceramic artist and he started working in clay with him in his studio, playng with clay. He graduated from the Faculty of Applied Arts Ceramics Department in Belgrade, Serbia in 1974. Vukićević completed specalization and advanced degree in 1976 at the same Institution.

From 1974 to 1992 he was a freelance artist working in his own studio. In 1992, he was elected Assistant Professor at the Faculty of Applied Arts. He has served as Professor since 2006 teaching all courses, intlcuding doctoral courses. He was elected to the International Academy of Ceramics, and to the Association of Applied Arts: Artists and Designers of Serbia. Vukićević is also an honorary member of Kerameikon Association in Varaždin, Croatia. Vukićević’s visits to Japan, Korea, and Taiwan, where he as been in residence have been of great importance to his development as an artist. Working as an international artist for more than 40 years, Vukićević continues to be passionate about the exchange of ideas and energy.