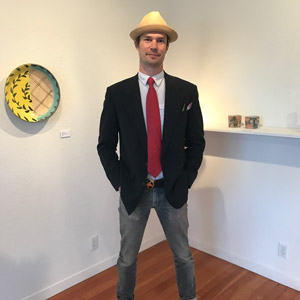 The primary intent of my work is to create thoughtful personal compositions and relatable everyday objects.

My forms are rooted in an aesthetic developed through a childhood spent in my father's architectural firm and mother's studio. The understated designs developed by mid-century architects and designers I saw as a child have stayed with me through the years. Elements of my work relates to designs of the Bauhaus School, the Eames, and the international style.

My surfaces are informed by a broad range of interests and experiences. I am influenced by patterning and colors found in fashion, graphic, interior and architectural design as well as mid 19th and 20th century painters and historical ceramics from around the world. Artists and designers such as Jean Widmer, Paul Klee, Anni Albers, Robert Rauschenberg, and Liubov Popova continue to affect my work. My glazing and patterning technique has become a starting point for determining the design of the form, allowing a conversation between form and surface. These surfaces include a tactile quality and utilize geometric patterns to create a rhythmic play between divisions built into the structure of the forms.

These forms, patterns, and glazes may at times seem busy. Their intent is to parallel the eventful and vibrant world in which we live by reflecting ways we often segment, structure and compartmentalize our lives while playfully providing handmade objects for everyday use.

HP Bloomer IV was raised in central Texas. After finishing his Bachelors of Fine Arts in 2007, he was the recipient of the Texas Arts & Crafts Scholarship and University of North Texas Toulouse Graduate School Masters and Doctoral Fellowship. In graduate school his work began pulling from his experiences being raised by a family active in the arts. His father was a architect and painter and his mother was a potter and educator who ran the studio department of the local art center. This has been the building block for the rest of his current body of work. Upon completing his MFA in 2011 he moved to Colorado for a residency at the Carbondale Clay Center. During these two years, 2011-2013, he served as a studio technician at CCC while maintaining positions at Colorado Mountain College, the Aspen Art Museum, and the Harvey Meadows/Artstream Gallery. He has since been a Artist in Residence at the Arrowmont School of Arts and Crafts in Tennessee (2013-2014), Studio Manager at Santa Fe Clay (2014-2016) and is currently a Artist in Residence at Cobb Mountain Art and Ecology Project and Adjunct Faculty at Mendocino College in Ukiah. He has had work published in Lark’s 500 Teapots and Ceramics Monthly, Studio Potter and continues to exhibit his work around the country. He is currently represented by Eutectic Gallery in Seattle, Lillstreet Gallery in Chicago, Anderson Ranch Art Center in Snowmass Village Colorado, Santa Fe Clay in Santa Fe, The Lions Nest Gallery in Austin, and Arrowmont School of Arts and Crafts.