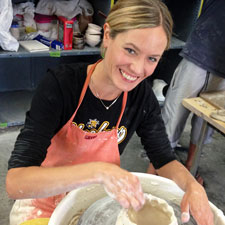 Making things is important to me. It is the way that I ground myself and connect to people and the world around me. This is true, whether I am in the kitchen preparing food, or in the studio working on my pots. For me, there’s great satisfaction in creating something from scratch and putting it out into the world for others to enjoy.

It is important to me that my pots carry a sense of having been touched. Working my hands over the entire surface of the piece allows me to physically connect to it, instilling it with my own liveliness and identity. The pots begin on the wheel, and are later altered off the wheel by stretching, massaging, pulling and pushing the clay outwards. This process creates a sense of volume that celebrates generosity and strength.

In most of my work, I accent the form with a thickly applied slip that allows me to create soft, fluid contours. These luscious lines can allude to the graceful movement of a feminine gesture or even to the rich creaminess of homemade hummus or a swirl of melting frozen yogurt. Atmospheric firing intensifies this richness, bringing out the butteriness of a glaze, or adding zest by activating the vibrant color of a flashing slip.

I strive to make beautiful pots that bring balance, energy, and enjoyment to the table.

Lichman was featured as an “Emerging Artist” by Ceramics Monthly Magazine in May of 2009. Her work was also awarded “Best of Show” in the Wichita Falls Museum of Art’s 2014 and 2015 Empty Bowl Exhibitions, juried respectively by Dan Hammett of the University of Dallas and Patsy Cox of the University of California, North Ridge.

Brenda’s work has been broadly exhibited across the country in notable exhibitions, such as the “23rd Strictly Functional National” in 2015. This year she is honored to participate in“50 Women: A Celebration of Women’s Contribution to Ceramics”, and “Heartland Table”, an exhibition project pairing potters with chefs in the Kansas City area as part of the 2016 NCECA Conference.

Her work has been published in books such as “Surface Design for Ceramics” and “500 Teapots, Volume 2”, as well as in the December 2014 issue of Ceramics Monthly’s feature article “Brenda Lichman-Balance and Versatility”.

Currently, Brenda is a studio potter in Wichita, Kansas where she also teaches at Wichita State University’s School of Art, Design & Creative Industries. Brenda coordinates the annual “Empty Bowl” fundraising project with the WSU Ceramics Guild, which benefits the Kansas Food Bank. She believes that we can make a difference in our lives and our communities through art, food and pottery.