“Breaking Ground” India’s first Ceramic Triennale concluded In Jaipur with record number of visitors. It celebrated and showed the wide ranging ways the medium has been used in India with the thrust not on traditional practices but rather on how artists are reinterpreting the most ancient material known to mankind.

Clay is the oldest architectural medium across cultures, from mud houses which still exists today to fired bricks that form the backbone of the building industry and urbanization.

In this article I discuss three artworks from members of Artaxis, all of whom make inquiry into urbanization and its impact. 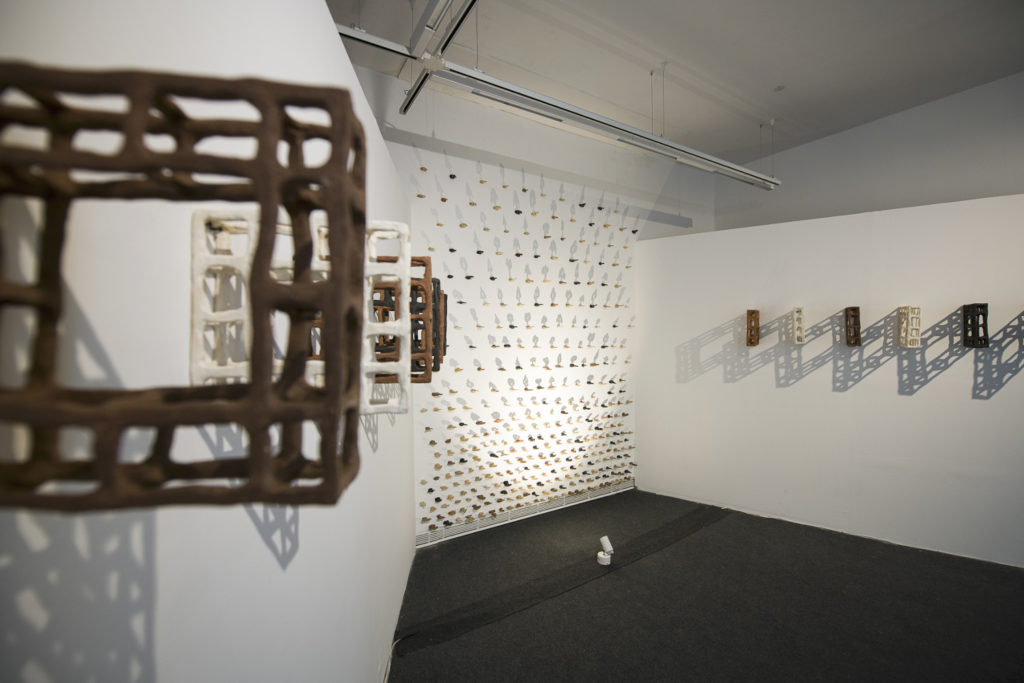 Madhvi Subramanian’s Forest of Shadows is a bold yet delicate work created in unglazed clays. The work has a dreamlike quality and offers a sublime narrative of the often conflicted interactions between human life and the natural world. 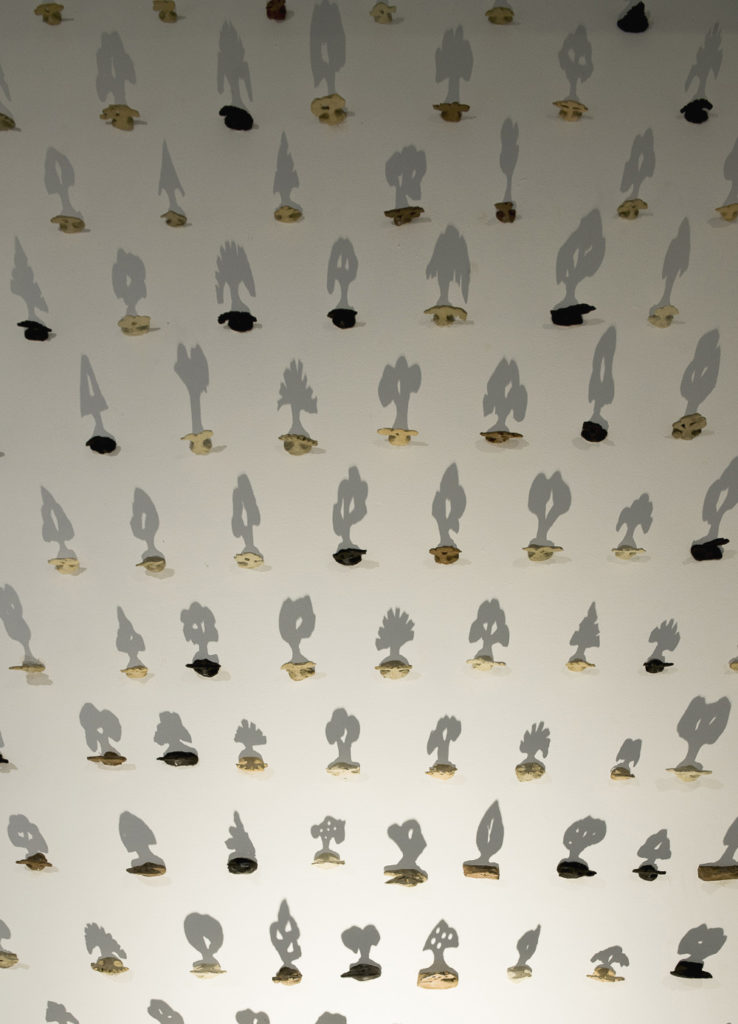 Shadows are always secondary; we pay attention to the object casting it however here it is the shadows that give meaning and context to the work. A three-dimensional triptych, the sides are made of gridded structures that loom over and threaten the natural world; a forest of shadows that forms the central focus.

The forest at first glance, appears to be made of a series of small un-refined lumps of clay. It is a surprise and a delight to see them reveal themselves in a definitive array of ascending and growing shadows as a light is directed toward them from below. Repeating similar forms multiple times indicates a contemplative and immersive practice, which is an intrinsic part of her process. Madhvi is a highly skilled hand-builder, in her previous works she works with scale effortlessly, and her surface treatment has a distinctive and interesting style.

In her later works, though we see a definitive shift to smaller forms which are repeated and arranged in varied ways to cast and create shadows that are central to the art work itself.

In discussing an earlier work titled Germination, Madhvi says, “While the conical forms projecting from the wall were derived from the plastic cones used to direct vehicular city traffic, they became points of germinating moments or like markers of time for me.  Although I did not conceive the shadows of the cones when I made the work it was a delightful moment of discovery- true serendipity- that gave growth to the germination. The Forest of Shadows, however emerged from works like In The Shadows of the Trees and Earths Whispers“

Forest of Shadows goes yet another subtle step forward; through use of shadows Madhvi has now also incorporated an active narrative into her repertoire. Pairing clay, which is solid, tangible, raw and textural with shadows that are fleeting, intangible and flat, Madhvi has opened up another portal of understanding and experiencing ceramics. Though Forest of Shadows is one of the few works that grapples with urbanization, it also simultaneously celebrates and venerates nature. The juxtaposition of her grid-like structures titled Windows, an abstraction of manmade urban structures against the organic forms that reveal shapes of different trees, makes us the audience, aware of the transient and ever-changing landscape being shaped by human action.

Neha Kudchadkar, in her work titled Somethingpolis, sees the city as a living, breathing organism. Misshapen clay pipes are a clever metaphor for a city gone rogue; a capitalist monster, whose long curving structures sprouting out of the gallery floors and walls are sculpted to appear puffed up in parts and chocked with so much energy that they have warped and distorted. They symbolize the flow of energy, ideas, hope and also destruction and destitution. The artist likens the pipes to body parts – limbs and organs.

Collected objects, drawings and photographs from various cities like Jaipur, Mumbai and Hebron, form an integral part of installation and provide context. The work deals with the zeitgeist of urban decay and mindless industrialization.

Revisiting the pipe metaphor of a once perfectly functioning world as a well-oiled machine, in Somethingpolis, we undeniably sense that the city has gone mad, gone wrong. Overloaded, overwhelmed and bursting at the seams the current reality is one of distortion and strangeness. It is also interesting to note that with very few elements, one structure coming out of the floor the other out of the walls, we are able to sense the palpitation of a city as a monster, an all devouring creature.

The sculpted forms seem to be made spontaneously, without much attention to beauty, colour or surface finish, that are usually preoccupations of ceramic artists. She unapologetically uses materials like PU foam, cement, plumbing pipes, plaster and glue, which also appear like skin or flesh on the long pipes that can be compared to bare bones.

It is no coincidence that these are modern construction materials which complement the terracotta clay (the most ancient construction material known to man), In that sense Somethingpolis also refers back to her earlier work of the Hand Job or the body in which unglazed clay is used to portray something living as an extension of one’s body, self-captured as a form or an impression and fired to make intangible ideas appear tangible.

TerraGeometrix is an abstract and poetic take on mindless urbanisation and the indistinguishable landscape that arises as a result. The work addresses loss of architectural identity and heritage through the subtle use of gold that contrasts with a dull and sombre brown. Rahul Kumar has been using the two-dimensional circle to create large wall installations in bright, monochromatic colours and varied compositions to explore ideas of dichotomy for some time. However, TerraGeometrix is a collaborative project with the artist Chetnaa, who comes from a background of drawing and refined geometry. She focuses on the moving line and its subsequent grouping and ungrouping. 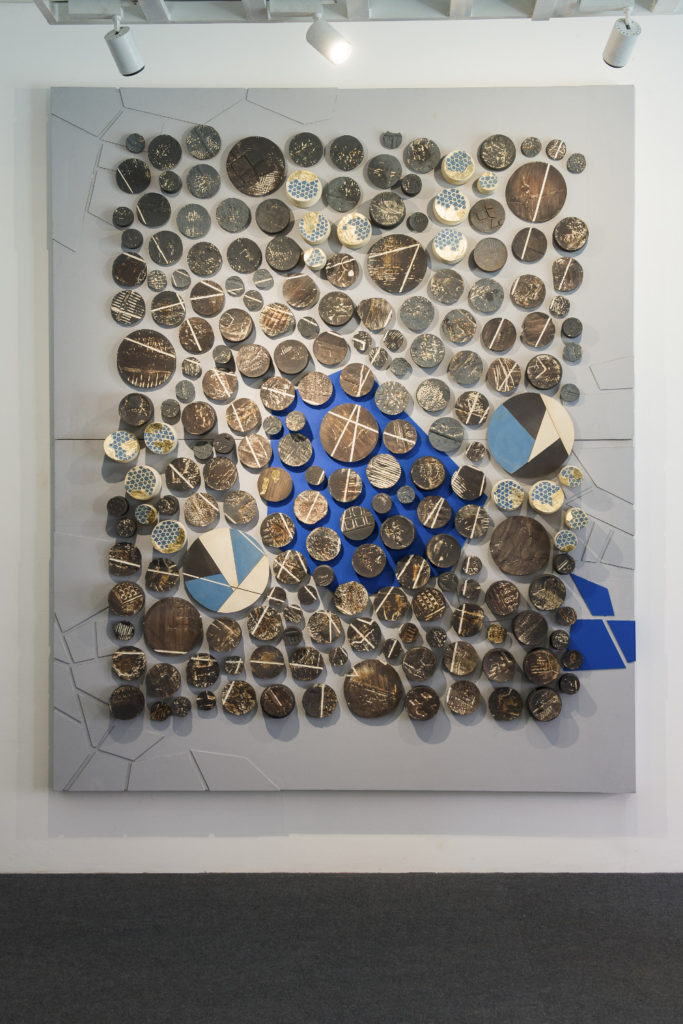 The collaboration itself has been refreshing for the duo. For Rahul it meant a release from orthodox concepts of object-based domestic craft-ceramics and a fresh look at the material and its possibilities. He recalls how he would never have thought of using a final engobe surface without a glaze earlier. For Chetnaa, too, working with a new material was a struggle to let go of the control and perfection of a paper-based work.

To create the dull brown look which represents the loss, the artists fired iron rich slips and engobes, and in some cases earth from their neighborhood which melted and adhered to the circular discs. Some discs appear to have remnants of the past in the form of blue jaalis and flashes of gold that peep at us from different parts of the installation, hinting at a rich heritage long gone and neglected. This was an important feature to the artists as they are relevant to the city of Jaipur, where the triennial was based. The work was created using 220 circular ceramic-disc components that mimic the forms created on the potter’s wheel. These tend to point at industrialization and perfection, perhaps indicating a loss of the hand, the beauty of the organic and the many makers.

The entire artwork has criss-crossed lines running through marking the rapid movements of traffic or people as seen in a bird’s eye view. We are confronted through the artwork, to the mad speed that our cities force us to live in. The lines also appear to be gashes that erase the past and signify a future where everything is homogenous and monochromatic.

Mindless Urbanisation is a universal issue today and hence the artworks discussed are very much placed within the global context. However all the artists were aware of the heritage of the city of Jaipur, where the triennale took place and found a thread to connect to this city.

Neha while personifying the city was mindful enough to use “body parts” on her walks and visits in Jaipur , she actually collected broken bits of mortar, bricks etc and incorporated these in the final sculpted work.

The very flat tree shapes that emerge as shadows are reminiscent of the “butis” or floral textile block prints Jaipur is famous for, this was a vital connection for Madhvi.

Terrageometrix uses the “Jaali” or the lattice work, which again is a quintessential element in the heritage properties of the city.

These connections not always obvious to the viewer give the artworks the local context.

Currently based between Delhi and Jaipur, Artaxis member Shirley Bhatnagar, graduated from the National Institute of Design, Ahmedabad majoring in Industrial Ceramics. Since then she has worked on many public and private commissions. Shirley has headed the Fired Material Application discipline at the Indian Institute of Crafts and Design, Jaipur, and currently she is visiting faculty in several leading design colleges in India. Shirley works on projects focusing on the revival of traditional crafts. She has four solo exhibitions to her credit and numerous group shows. Find her Artaxis page at Artaxis.org/Shirley-Bhatnagar/ 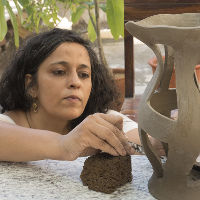