Somchai Charoen - "Ja-gan or vases"
2018, Various size between 20 x 30 x 40 cm , Media: Porcelain, Firing Process: Electric, Surface: Engobe / Slip / Underglaze, Oxide, Unglazed
Another experiment of stack mould. The moulds easily to be used to make a number of composite in different ways by stack on top each other to create a form by desire. 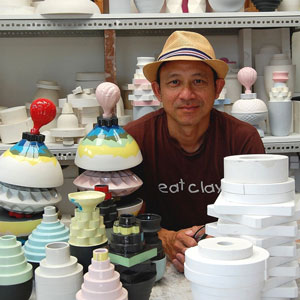 Somchai Charoen has many experiences in plaster mould making. He likes to challenge his skills by making moulds that will explore the idea and possibilities of what the mould making technique can be easily be used to make a number of composite moulds or can be connected in different ways by constucted or flexible arrangement. Mould making and slip casting used to be considered the domain of the industrial. Whilst remaining in active use in industry, there are now many artists who utilise this technique to create innovative and extraordinary artworks. using moulds gives Somchai the flexibility to experiment with the layering and repeating forms.

Somchai Charoen is a Thai born ceramic artist based in Sydney, Australia who has exhibited both nationally and internationally. Trained in industrial ceramics design, he was a former lecturer at Silpakorn University, Thailand. Since migrating to Australia in 2002, he has worked commercially as a mould and model maker as well as lecturer at National Arts School and Tafe NSW as a sessional.