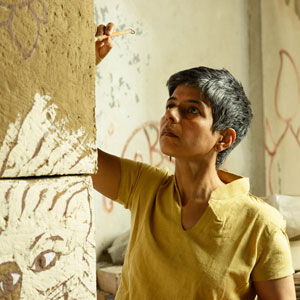 Artist Statement
My art practice is deeply rooted in the personal. An expression of that which is lived and experienced, an inside – out evolution, as much enriched and enlivened by life as sustenance to my spirit.

Intrigued by the paradox of eternal truths in ephemeral moments, I find myself increasingly led, ever more insistently inwards. Seeking essence. Toward a stillness beyond the momentary.

My early training as a painter is reflected in my ceramic work. My engagement with yoga and eastern spiritual philosophies imbues my life and work.

Aarti Vir works out of her studio in Hyderabad, India.

She studied painting at the Faculty of Fine Arts, Maharaja Sayaji Rao University – Vadodra and S N School, University of Hyderabad, before spending three years at the Golden Bridge Pottery – of which the last year was as an apprentice to Ray Meeker.

She returned to her hometown, Hyderabad- India in 1999 and set up her studio. In 2003, she was awarded the Charles Wallace India Trust scholarship. She spent a semester at the ceramics department, University of Wales Institute Cardiff and thereafter apprenticed with Micki Schloessingk, while on the CWIT scholarship.

In 2008, she apprenticed briefly with Sandy Lockwood and Gwyn Hanssen Pigott in Australia.  She has been artist in residence at the Gaya Ceramic Art Centre in Bali in 2012 and in Fuping, China, in August- September 2013.

Her work has been exhibited in India, Japan, Australia, USA, Bali, China and South Korea.