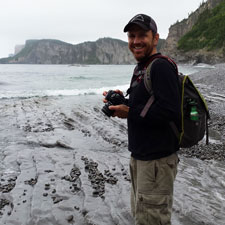 I look for the historical, cultural, and the contemporary significance of things made from clay. My work is a marriage of form and imagery in ceramics. The conversation of form is about fluidity, intuition, intention, grace and purpose.

The forms that I make are largely functional. The images that envelop them are generated from my own photography. The results are surreal narratives that are open to subjective interpretation. As you view and explore a piece, the significance of individual images and the overall story lines will change over time. My hope is to elicit an ongoing sense of surprise and foster an evolving relationship with the piece.

Adam Paulek is currently an Assistant Professor of ceramics at Longwood University in Farmville VA. He is originally from Keosauqua IA, and earned a B.A. with a major in art at Buena Vista University IA in 1999. His interest in clay led him to Asheville NC, where he apprenticed under potter Hank Goodman for three years. Following this, Adam attended graduate school at the University of Tennessee in Knoxville, receiving an M.F.A. with emphasis in ceramics. He then created and ran a clay-based art center called Mighty Mud Studios in Knoxville, while continuing his own work and studio development. In 2009, Adam moved to Virginia, created a new studio partly out of recycled steel shipping containers, and rejoined the academic community. In 2012, Adam was the featured Salad Days Artist for Watershed Center for the Ceramic Arts in Maine. In 2013 he was awarded the “100 Cup Artist In Residence” at Guldagergaard – International Ceramic Research Center, in Skælskør Denmark. In the summer of 2015, Adam was an artist in residence at Masion Des Mètiers D’Art De Quebec, in Quebec City.