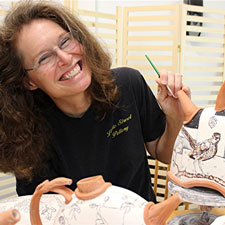 The pottery that I have been creating over the last few years is all hand drawn. I choose my images from my own unique vision of the world around me- as I want to see it. I gravitate towards detail, drama, complexity and childhood innocence. I often distort my drawings and like to connect the images as I draw them around the piece. I choose my forms to compliment my imagery and forms which I can use as a canvas. Most of the work is done on porcelain and porcelain striped with stoneware. I like to throw although lately, I have also added hand built pieces to my collection. Once the images are bisqued onto the pieces, I begin the tedious process of glazing. In the spirit of childhood innocence, all my work is colored with various hand made and commercial glazes and brushed on like a paint by numbers or a coloring book.

My first pottery mentors were Gary Hatcher, Professor at University of Texas at Tyler and Jake Allee, Professor at Tyler Junior College. As I continued to take classes at the university level, I developed critical thinking skills and great work habits in the pottery studio.

In 2007, we moved to Virginia where I organized my own pottery studio, Little Street Pottery, LLC. I am represented in various galleries around Hampton Roads, Virginia and participate in numerous shows and festivals. I have had eight articles published in Pottery Making Illustrated. These articles were then republished in books edited by the American Ceramic Society.

I have been juried into nine national exhibitions and two international exhibits. In 2013, I was hired to teach pottery for the City of Norfolk, Virginia. I currently teach classes and workshops in southside Virginia.

I am a member of the local pottery guild in Hampton Roads called Ceramic Designer’s Association where I participate in group shows and volunteer with their annual Empty Bowls Dinner to help raise money for the hungry in the area. I am also a member of the Potter’s Council which is a nonprofit subsidiary for The American Ceramic Society.