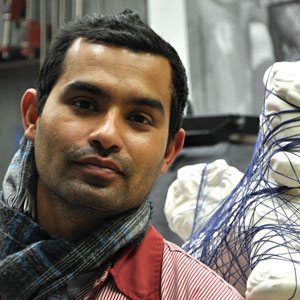 My art practice is intended as a playful counterpoint to the darker images and ideas that inundate us through mass culture. I use irony and humor to evoke a sense of parody in my work. As an artist I am interested in the manipulation of images from everyday life and popular culture and how this visual information can be redirected and give life to my creations.

Through portraiture and caricature, I create comically irreverent images drawn from my jumbled youth. Pop culture, mass media, religious iconography, and quotidian observations are civilly canonized as high-relief sculptures, minimalist interventions, and absurd juxtapositions that question the largeness of these larger-than-life embodiments. In examining my own history, I deny the authenticity of the past memories and the invincibility of adulthood. Instead, I seek to create an existence of complicated iconography that gives odd relevance to sculptures and paintings.

The found image allows me to connect with my viewers immediately as well allow them to place their own associations within the work. I seek to emphasize the intricacies of everyday life, which allow us to relate to each other while stirring a sense of the odd or unique that thrives in everyone of us. The core of my work lies in the stories of the characters I explore and how they act as placeholders for a time that can no longer be attained, one that takes us back to a time of playfulness and naiveté in our ideas about the world.

Armando Ramos working in a variety of media—primarily in clay and wood—the basis of the work lies in the stories of the characters explored and how they act as placeholders for a time that can no longer be attained. His pieces take us back to a time of playfulness and naiveté in our ideas about the world. Ramos uses toys and playful references to speak about complicated social histories and how these histories and ideas engage with the wider world. He utilizes alternative and traditional surface treatments altering surfaces with glazes, gold leaf, or thread.

Armando first trained in ceramics at the Kansa City Art Institute where he did his undergraduate studies (BFA Art, 1999). Other studio training included a one-year residence at the Richard Carter studio in Napa California. Soon after he completed his graduate studies at Montana State University in sculpture (MFA 2003) before moving to San Francisco, CA to continue his studio practice. Armando now works lives and works at his studio in Ventura, California, where He serves as the Sculpture Professor at Santa Barbara City College.

Armando Ramos is the recipient of grants and fellowships from the North Dakota Council on the Arts, the Frey Foundation, the Red Lodge Clay Center Red lodge, Montana, the Vermont Studio Center, and the International Ceramic Workshop California State University of Long Beach. His work has been shown at Grand Rapids Museum of Art Grand Rapids, Michigan; The Zanesville Museum of Art in Zanesville, Ohio; The Clay Studio Philadelphia, Pennsylvania; The Oakland Museum, Oakland, California.