Abigale Brading - “I Can’t Even Save Myself”

Abigale Brading - “I Can’t Even Save Myself” (Detail) 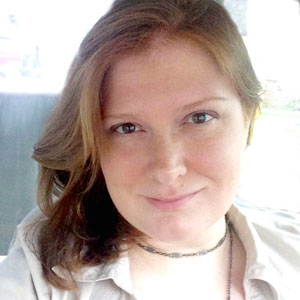 My sculptures challenge beliefs that restrict social progress and personal growth. Each convey free thinking and bring awareness to gender, religious, and inherited inequalities within social structures. I create narratives that provide insight into struggles seen through a humanist lens, and I tap into the notion of empathy that is understood at its peak when shown and experienced through the modeling of behaviors and detailed visual components. Through the malleable nature of clay, I link symbolic architectural structures and anthropomorphic figures together to portray a sense of burden and weight that is tied to individual experiences with indoctrinated principles. My work invites the viewer to look for the human connections behind each cause and its effect. The focus of each theme revolves around a non-typical female form. Her albino, doe-like features are an allegory veiled in philosophies of transcendence, wholeness, and compassion. Her development alludes to a boundless being who has achieved a higher state of existence that is raw and unapologetic. The nature of the architectural elements speaks about control, confinement, personal burdens, systems of power, and dogma. At the backbone of my artistic practice is the desire to remind that we should strive to live in a pluralistic society, where people are free to hold various beliefs but are tolerant of other's philosophies, even when they are diametrically different than our own.

Abigale Brading is a sculptor that combines symbolic architectural elements with mythological themes to move viewers into an awareness of contemporary social issues. Brading uses her personal history as a starting reference within her work to talk about broader attitudes surrounding religion and its role in a progressive society. She defines her artistic practice as taking a series of risks both on a personal level and in testing the limits of the materials. She received her Bachelor of Arts in 2011 from Morehead State University, Kentucky, where she studied ceramics and sculpture. She spent two years developing her artistic voice as a post-baccalaureate in the Ceramics Department at the University of Florida in Gainesville. In 2017, she completed her Master of Fine Arts degree in Ceramics at Indiana University – Bloomington. Recent accomplishments include being accepted into the NCECA 2017 National Juried Student Exhibition. Her work has also been featured in Red Lodge, Montana in the Red Lodge Clay Center’s biennial Juried National exhibition in 2015 and was also accepted in the 2017 exhibition. She is currently working on constructing her home studio and plans to pursue a career in the arts field to promote higher learning.