Adam Abel - “from the cycle INVERSION” 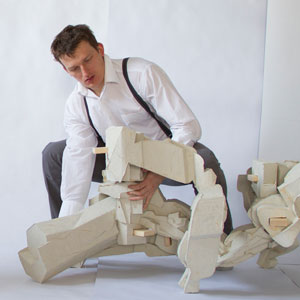 Media Art and Ceramic Art are two fields that mutually influence and determine my artistic activity. The first is based on movement and illusion in space, which allows me to revive seemingly still objects and build complex contexts integrating the picture, movement, and sound; The second connects me with the real world and its physical forces through three-dimensional form and material.

By working in different disciplines, I try to identify places where movement in various manifestations can contribute to the disintegration of the traditional concept of an object and its reconstruction in a new transformed form. So far, my work has been focused on building the relationship between a physical sculpture and its animated or filmed substitute. This led me into the borderline areas where three-dimensional objects and their substance becomes a process more than a state of existence.

Adam Abel (born 1971, Poland) is a multimedia artist. He graduated in ceramic design from the Academy of Art and Design in Wroclaw (Poland). Apart from ceramic sculpture, he deals with digital media (computer animation, video, photography). Currently he is the Head of the Department of Interdisciplinary Activities at the Faculty of Ceramics and Glass at the Academy of Art and Design in Wroclaw. In 2000, he worked as a visiting artist in Myers School of Art (The University of Akron), Ohio, in the United States. Between 2005 and 2006 he worked in South Korea, where he held the position of Professor in the Faculty of Ceramics at the Kyng Hee University. He has had more than 10 solo exhibitions in museums and galleries including Tong In Gallery (Seoul, South Korea) and the Gallery of Contemporary Art BWA Wroclaw (Poland). His works have also been shown in more than 100 group shows at venues like WRO International Media Art Biennale (Wroclaw, Poland) and the International Ceramic Film Festival (Montpellier, France). In 2011 he was awarded the Bronze Prize at the Icheon International Biennale in South Korea. His works are featured in Polish and international contemporary art collections.