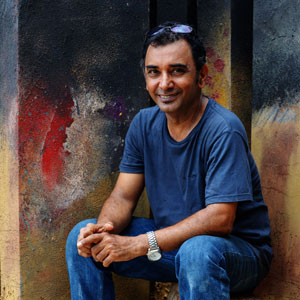 Despite the sculptural elements in my work, I see that I keep gravitating to the container ...anything that contains..... which also opens up infinite possibilities.

The simple bowl is surely going places It may well be on its way to becoming a family heirloom, ...or that one favourite pot in ones kitchen!

Will function again win the bout? Well, it could go either way.... from experience I know that several parsi aunties have taken my functional pots home and kept them as decorative captives in showcases, rubbing their glazed shoulders with the ubiquitous cut-glass vases that were the rage in the seventies.

Does this bother me? Why should it? To each his own, I say! The triumph of a usable piece is when people see the sculptural aspect of a thrown pot enough to elevate it to the showcase. I for one, am happiest serving or sipping out of the countless clay objects in my over-stuffed parsi showcase at home! Insta-joy also springs forth when chefs and amateurs post innovative plating photos on Instagram, in my tableware. The snob value of the showcase piece or the love of a wabi-sabi bowl that's frequently used all levels out one day or another!

There was a phase when I was obsessed with making abstract teapots.... wirecut from generous chunks of clay. At a show where I was exhibiting my Flamenco Teapot Series, there was a lady busily flitting around my pedestals for days, and walking away confused... finally I intercepted her on the last day of the show and asked her if there was a problem. She looked me in the eye and said, "I love the movement in these pots; but for the longest time I have been trying to figure out something. WHERE DOES ONE POUR WATER IN THESE TO MAKE TEA?!" To which i replied, "These are abstractions... non functional. Its for you to see the 'fun' in nonfunctional". Well, to cut this story short, the lady gave me a haughty you-cannot-be-serious look and floated away in her chiffon saree. Function once again won the bout ... for her at least.

While the debate of art and craft goes on forever, one needs to understand that the purpose of art is not always to create an object but maybe to tickle the thought process. The secret is not the mechanics or technical skills that generate art - but to goad introspection, maybe contemplation. Embrace this process and the world of clay is yours for the taking!

Adil Writer’s CV reads like a travel retrospective. Wander-lust is what he says takes him across the world for invited residencies, workshops and exhibitions. Adil is an architect with a Master’s degree in architecture from the University Of Houston, Texas. He worked in Bombay as an architect before reaching Golden Bridge Pottery to learn ceramics. Since 2000, he is a partner at Mandala Pottery in Auroville where he strikes a fine balance between making functional tableware and his own studio ceramic work which is usually soda/wood-fired. Mandala Pottery is currently one of the forerunners of handmade functional stoneware in India, making mostly wheel-thrown or slip-cast tableware for the domestic as well as international market.

Writer’s ceramics and large-scale unfired clay & acrylic paintings have been showcased at several solo and group exhibitions in Japan, China, India, Indonesia, Australia, Estonia, France and USA. Under the guidance of his teacher Ray Meeker, he learnt the technique of building and firing mud-brick houses, which he later built by himself at several residencies internationally, most notably the large dome “Gulgong Mahal” at Janet Mansfield’s iconic property in Gulgong called Morning View.

In 2013, Writer was instrumental in arranging a residency for a group of 18 Indian ceramists to Fuping that led to their making works for the proposed Museum of Contemporary Indian Ceramics in China. Later in 2014, he organised a residency for another group to Korea at the Naori Festival, hosted by the celebrated clay artist, Hsung Ho.

At Shigaraki, Japan, Adil culminated his three-month invited residency with a solo show titled “Himitsu Te Uso”. His works from Shigaraki were later exhibited at Gallery Art & Soul, Bombay, at a solo show “Secrets & Lies”. He has also featured in “Six by Six: Interpreting Craft in Gondwana”, a path-breaking Indo-Australian show at the Australian Triennial in Canberra featuring three Indian and three Australian ceramists. This exhibition later moved to Tai Hwa Gallery in Yingge, Taiwan during the 2018 IAC conference in Taiwan.

This spirit of dialogue and interaction has led to “In Collaboration” a duo show with celebrated artist, Laxma Goud, at Pundole Art Gallery in Mumbai.

In 2018, Adil Writer curated Golden Sunbeams, an outdoor mixed media sculptural exhibition in Auroville. He was also the curator of the South Zone at the recently concluded show, “Porcelain”, presented by Delhi Blue Pottery Trust, showcasing an array of Indian ceramic work in porcelain.

Writer is a part of the Diagonal Eleven group, a collection of ceramic artists from various countries. This group has interacted at residencies at El Torn in Barcelona and earlier this year at La Meridiana in Tuscany, Italy.

Writer is a member of the International Academy of Ceramics, Geneva.