Aimée Papazian - “Sunny Side Up”

Aimée Papazian - “Sunny Side Up” (detail)

Aimée Papazian - “Murmuration (with Stripe) I” 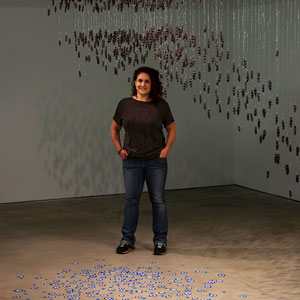 Made out of ceramic, thread, wire, and wood, the work is an investigation of phenomena that make my heart lift for a second – lately, constellations and murmurations (flocks of birds). A long-running theme has been anatomy, which for me is a reminder both of mortality and also of the strong similarity that all people share under their skin.

The practice itself is often an exercise in accretion – the accumulation of tiny parts that transform into much larger whole.

Communication, or making myself understood, is something I struggle with. The work is an attempt to find a more satisfying language, a lexicon of birds and stars, and also of clouds, dark masses, and viscera. Words, if they are used, are played with – both in terms of their physical forms and the sounds and meanings they make.

All the work is about time, in some way. The murmurations or bird groupings are a freeze frame, the constellations are a nod to deep time, the organs are tiny, fragile, and gold -- a way to acknowledge the plumbing that will ultimately stop working at some point. Ceramic is dirt, dust -- like the stars, like us. Ceramic also has the potential to last for thousands of years, offering a toehold into disrupting the scale of time afforded to most humans.

Aimée Papazian creates installations and objects using ceramics, wood, and wire. She has a BA in Art-Semiotics from Brown University and an MFA in Film/Video from the Milton Avery School of the Arts at Bard College. Originally an experimental filmmaker, her medium evolved (or rather devolved, back to dirt) to focus on the joy she finds working with clay. She has shown her work in juried shows and in Hotel 21c, and is a recipient of the Artists 360 grant. Her residencies include the Guldagergaard Ceramic Center (Skaelskor, Denmark) and the Zentrum für Keramik (Berlin, Germany). Aimée grew up in New York and now lives in Northwest Arkansas with her family.