Alanna Derocchi - "Alanna DeRocchi, “A Part of a Place”, detail" 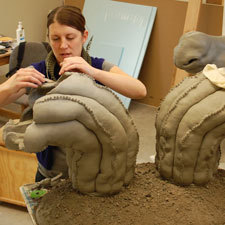 I can't imagine feeling anything but detachment from something I myself did not witness. The only things I know for sure come from what was personally seen and experienced, and anything short of that is disconnected - surprisingly unknown and almost imaginary. The frustration from this has generated a desperate sense to not forget the things encountered in life and a desire to be a part of and make memories of things in the natural world that are mysterious and unfamiliar. The result becomes my work, which is a visual response and sincere exploration of this distance and estrangement felt from the world around me. It is a relentless search for a grounding- a way to create a connection, a history, to this world, however unnatural it may become, through my own observations and fragments of memory.

Alanna DeRocchi is originally from Petersburg, Illinois. She received a BFA from Western Illinois University in 2004, and an MFA from the New York State College of Ceramics at Alfred University in 2010. Since finishing her education, she has participated in several ceramic artist residency programs, including the ClayArch Gimhae Museum Ceramic Arts Residency in Jilllye, South Korea, and the Archie Bray Foundation for the Ceramic Arts in Helena, MT. Alanna has exhibited in numerous museums and galleries across the United States and internationally. She recently was awarded a faculty development grant to help further her personal studio research at the University of Alaska, Anchorage, where she is currently a Term Instructor of Art and Technician in Ceramics.