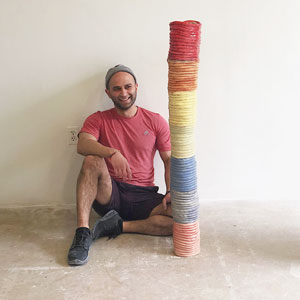 Communication has always been a struggle for me. As a child, it was because Aramaic was my first language, As an adult, it is because of being a minority for more than just my skin color. Through art, however, I’ve found the clearest and most effective channel for communicating my life experiences.

My practice is an expression of personal experiences, conveyed in my most comfortable way of communicating.

I am currently interested in sharing my story, thoughts and feelings through objects that I feel comfortable communicating with. I am interested in the relationship that these objects have with one another and how they make each other stronger.

Growing up as a Queer Middle Eastern male in the 90s meant living life as an outsider. I was constantly struggling to blend in with whatever people deemed “acceptable.” It didn’t help that English was not my first language – instead it served as a reminder that I was an outsider.

Having grown up to immigrant parents, I have been exposed to many languages. I consider speaking through images or objects to be the most significant language for me. Looking back on the past I found the time that I’ve spent in the studio the most important. Here I am able to be me. I can create a story, stimulate a conversation and try to connect with anyone. I have noticed that there are no judgments, just acceptance and understandings of different beings bringing knowledge to any that desire to learn.

I studied at Western Michigan University to obtain my bachelors degree in photography and intermedia. After that I spent years working as a graphic designer/art director. Then from 2016-2018 I studied under Anders Ruhwald and Ian McDonald among other artists to obtain my Masters in Fine Arts in Ceramics from Cranbrook Academy of Art.

I still reside just outside of Detroit with plans of moving into the city soon. Currently I am working in my studio based in Royal Oak, MI, making new work for a solo show in 2019 as an emerging artist.