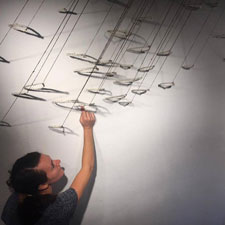 Amanda Salov is an artist whose work has examined the qualities of a moment, or the idea of a moment in physical form: temporal, fragile and fleeting. Currently, the work Amanda Salov produces focuses on the central theme of “remains and skeletons revealing the fragility within.” Focusing on the subtle strengths inherent in seemingly delicate compositions, the work is generally comprised of components that collectively contribute to a larger, quietly strong singular presence. The goal is for these circumstances to ultimately reveal the strength in fragility to the viewer. Strength and fragility tend to be thought of as opposing qualities. Her work investigates the idea that there may be a false dichotomy in that way of thinking.

Amanda Salov is currently a studio artist in Corvallis, OR. Raised in rural Wisconsin, Amanda received her BFA from the University of Wisconsin - Whitewater (2003) and her MFA from the University of Missouri - Columbia (2007). From 2007 - 2011 she taught at the University of Arkansas. Amanda has shown her work throughout the United States and has earned a number of awards, including being named an NCECA emerging artist in 2010, 2nd place from the Zanesville Prize, a recipient of an Oregon Arts Commission grant in 2013 and again in 2016. She spent a summer assisting in the sculpture department at Anderson Ranch Art Center in Snowmass Village, CO (2007), served as a resident artist at Oregon College of Art and Craft in Portland, Oregon (2011), and at The Archie Bray Foundation for the Ceramics Arts in Helena, Montana (2012) and Watershed Center for the Ceramic Arts (2014.) Amanda was a visiting artist and lecturer at the University of Washington in Seattle in 2015.