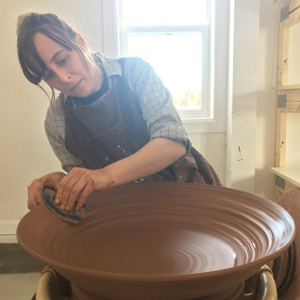 For the past 20 years, investigations into the material nature of clay have been the focus and foundation of my sculptural compositions, vessels and assemblages. My introduction to ceramics was with a one-year studio pottery apprenticeship in the United Kingdom. The rigorous emphasis on craftsmanship as an apprentice instilled in me an interest in the traditional craftsmanship principles of a studio potter that I have carried with me even as my work became more sculptural. From 2001-2005, I traveled extensively in Asia, where I spent my time living and working with a community of potters in Thimi, Nepal. While there, I was given the experience of collaborating and working alongside artisans from diverse cultures, and was able to participate in on-site learning and use of traditional methods and foraged materials from my local environment. These early travel experiences have been vital to my ongoing education as an artist. My pursuits in clay have continued to be informed by in-depth explorations of ceramic materials in their natural environments. My time in England, as well as the time I spent in Nepal, were formative influences on my ceramic practice because of the exposure I had to a diverse set of methods, tools and materials, as well as the relationships I formed with other artists during my time away from home.

When I returned to the United States and established my first studio, I continued to make functional pottery while developing a deepening interest in sculptural ceramics. Over the years of working in my own studio, I carried with me that initial excitement of being immersed in methods, materials, and language that were unfamiliar to me, and I continued to approach clay with an attitude of self-reliance, and of figuring out what I could make with what I had at hand. I began creating forms that explored relationships of dissonance between different types of ceramic materials. Having foraged for materials in Nepal, where no commercial materials were available, I have always been excited by this process. I enjoy using a ‘stream of consciousness’ approach to creating my forms, and as I encounter intriguing materials, I add them in, usually without diligent testing. From the beginning of my life in clay, I have been working to cultivate ‘material intuition’, balancing my formal craft approach with the introduction of elements that challenge the feeling of being in control. This has become an overarching concept in my work and is an idea that very much ties in with my ‘human experience’.

Clay is plastic and mutable but also contradictory in the forceful permanence of its fired form; it is able to be crafted and shaped, yet somehow eludes our ultimate control, by the will of its own natural processes inside the kiln. I explore and manipulate these proclivities by combining disparate ceramic materials in unusual ways, throwing and hand-building with stoneware and porcelain, stitching pieces together with metal wire, adding inclusions of rocks and studio detritus, fired shards and bits of spent kiln coils. I love to observe the conversation between ceramic and the fragments of other materials I introduce—do they reject one another, or fuse gracefully, or learn to live side by side? I am captivated by the surprisingly beautiful disharmony in the materials, their evolving relationships of strife or relative comfort, fusing into a tenuous balance during the firing. My sculptures and vessels are intended as abstract manifestations of our actions as human beings in object form: we form relationships, make, build and construct the world around us, even with the awareness of natural processes inherent in the passage of time that undo our work, shift and change everything as we go along. My practice is about building, making, creating positivity from the surrounding landscape of unavoidable brokenness, building from wreckage and fragments that are evidence of lived experience. My pieces seek to unveil the refined within the rough, the beauty in ugliness, forms imbued with fragility yet exhibiting inner strength, grappling with the contradictions and play of opposing forces we find in ourselves throughout the human experience.

My recent work focuses on pressing issues weighing on all of our minds: environmental collapse, social collapse, an urgent need to clean up and rebuild from the mess we have made as human beings, not caring properly for our habitat. My approach is a little like scavenging-- building and creating visual compositions incorporating new forms with additions of fragments and remnants. The pieces seek to create harmony and beauty in piecing together what looks like meaningless detritus of a collapsing world, and in doing so, reclaim a tenuous and fragile feeling of meaning and purpose.

Ani Kasten began her career in ceramics in 2000, by apprenticing with British ceramist Rupert Spira. After a year in England gaining a foundation in functional studio pottery, Kasten traveled to Kathmandu, Nepal, where she spent four years as head of a project for developing a stoneware ceramic facility for artisan potters in the village of Thimi, Nepal. Her training in England and her experiences in Nepal were a formative influence on Kasten’s ceramic sculpture and vessels, which draw on minimalist British studio ceramics, as well as hand-made antiquities created by indigenous peoples throughout Asia. Kasten greatly benefitted from sharing techniques and materials with artisans from diverse cultures, and this has given rise to a unique artistic vocabulary that informs her own ceramic work. In 2005, Kasten established her studio in Oakland, California, where she shifted from making functional studio ceramics to also creating sculptural ceramics. In 2007 Kasten became an Artist in Residence at Red Dirt Studio in Mt. Rainier, MD, where she worked closely with artist Margaret Boozer. Here, she further developed her distinct combination of sculpture and vessel work, showing her ceramics nationally at galleries and fine craft shows. In 2012, she purchased an old shoe repair shop to house her studio as well as workspace for other artists. Kasten’s storefront studio and gallery, Artbar, was a draw for visitors and collectors, and became one of the neighborhood creative hotspots. In 2016, Kasten moved to the St. Croix River Valley, northeast of Minneapolis, Minnesota, where she is currently a host potter for the historic St. Croix Valley Pottery Tour. Kasten lives in Shafer, Minnesota, on a small farm with a house and barn where her studio and showroom are located. She continues to exhibit her work nationally and internationally in galleries and fine craft exhibitions.