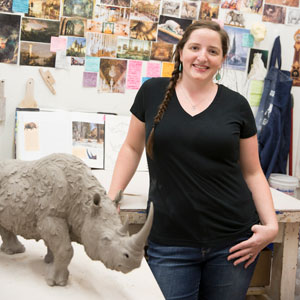 I make sculptures of prehistoric animals that represent the wonder to be found in natural history. I am intrigued by animals that evolved with distinct features, such as unfamiliar tusks, strange elongated limbs, and unusual proportions. I use clay to bring these extinct creatures back to life, sculpting folds of flesh and filling their bellies with air.