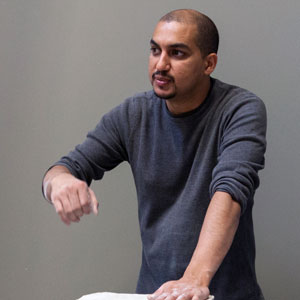 Arun Sharma’s autobiographical artwork revolves mainly around the figure. He examines birth and death and their relationship in the overall schema of human life. He is also interested in the relationship clay has to the human body, both physically and metaphorically. Using emotively beautiful work he elevates the viewer’s senses by drawing them into a world beyond the familiar, all the while presenting identifiable themes.

Arun Sharma was born and raised in New York State. He holds a MA Ceramics from Cardiff Metropolitan University, UK (2011), a MFA from the University of Washington, USA (2009), and a BFA from Alfred University, USA (2001). Arun has lived and worked as an artist in the USA, Canada, Japan, Australia and the UK where he was awarded a US-UK Fulbright grant to research the Fragmented Figure at the National Center for Ceramic Studies at Cardiff Metropolitan University. Arun has received numerous grants, awards and residencies nationally and internationally and has been invited to lecture and teach at universities in the UK, USA and Australia. Arun Sharma now lives in Sydney and continues to exhibit his artwork nationally and internationally.