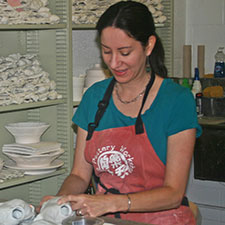 “Objects hang before the eyes of the imagination, continuously re-presenting ourselves to ourselves, and telling the stories of our lives in ways which would be impossible otherwise.” - Moira Vincentelli

The things we collect and that surround us reveal our narratives and silently map our personalities. What we leave behind becomes the physical memory of our existence. Objects contain ghosts of memories and have the power to disclose forgotten secrets.

I am influenced by the silence and expanse of cathedrals, the familiarity of domestic spaces, and the magical reality of dreams. I hope to conjure memories and transform awareness. At times, I approach pieces that I have created from previous installations as found objects. By reworking, new installations evolve. Recently, I hand build multiple porcelain objects to open new chapters of exploration.

My current work focuses on the imagery of bones and flowers in order to reflect life. I am interested in the human condition, how an individual relates to their surroundings, and how identity is formed and transformed. Making art is a continuous search for meaning.

Blake Williams is a ceramics artist and Associate Professor in the Department of Art, Art History, and Design at Michigan State University. Blake discovered her love for clay at Cranbrook Kingswood high school in Michigan and her passion for teaching at Pottery Northwest in Seattle, Washington. She earned her BFA from the New York State College of Ceramics at Alfred University and her MFA from Louisiana State University. Blake has exhibited nationally and internationally. Her pieces are in various national private collections, the Michigan State University Spartan Stadium, and the Jingdezhen Ceramics Museum. Blake’s work has also appeared in American Craft and Ceramics Monthly magazines. Her current conceptual focus examines the relationships between the tangible and intangible aspects of objects and mortality with patterns of porcelain bones and the hope reflected in multiple blooming flowers.