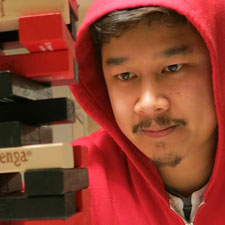 Peoples throughout history have bought, adopted or pillaged technologies from one another, often through the mechanisms of war, trade and espionage. ‘Nations’ and ‘cultures’ are not discrete entities, but are rather continually evolving expressions of social history, economic imperialism and geo-politics.

Viewed in this way, globalization is a historic trend, but one that is accelerating. The rate and extent of globalization has increased exponentially through increasingly complex technological revolutions – agricultural, industrial, and now digital. Yet, at same time as this technological convergence, the cleavages between populations defined by race, religion and nation are being redrawn, redefined and reinforced. Clearly, “we” (patriots, developed, democratic) are not like “them” (insurgents, underdeveloped, oppressed). Globalization, translated through capitalism and nationalism, has not yielded cultural uniformity.

Manga Ormolu enters the dialogue on contemporary culture, technology, and globalization through the relationship between ceramic tradition (using the form of Chinese Ming dynasty vessels) and techno-Pop Art. The futuristic update of the Ming vessels recalls the 18th century French gilded ormolu, where historic Chinese vessels were transformed into curiosity pieces for aristocrats. But here, robotic prosthetics inspired by anime (Japanese animation) and manga (the beloved comics and picture novels of Japan) subvert elitism with the accessibility of popular culture.

Working with Asian cultural elements highlights the evolving Western experience of the “Orient.”

This narrative is personal: the hybridization of cultures mirrors my identity as an ethnically-mixed Asian Canadian. My family history is one of successive generations shedding the markers of ethnic identity in order to succeed in an adopted country – within a few generations this cultural filtration has spanned China, India, Trinidad, Ireland and Canada. Cultural appropriation and assimilation seem like a natural part of my identity, a survival technique not uncommon among ethnic minorities.

While Manga Ormolu offers multiple points of entry into sociocultural dialogue, manga, by nature, doesn’t take itself too seriously. The futuristic ornamentation can be excessive, selfaggrandizing, even ridiculous. This is a fitting reflection of our human need to envision and translate fantastic ideas to reality; in fact, striving for transcendence is a unifying feature of human cultural history. This characteristic is reflected in the unassuming, yet utterly transformable material of clay. Manga Ormolu, through content, form and material, vividly demonstrates the conflicting and complementary forces that shape our perceptions of Ourselves and the Other.