Bri Murphy - "A Declaration for the United States of America"
2018, 24x30", Media: Non-clay
Hand-written interpolation of The Declaration of Independence. Archival ink on paper. 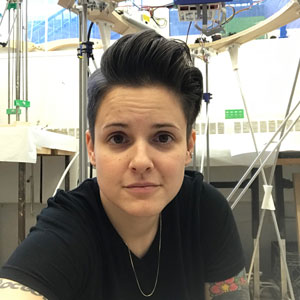 My work is a result of interdisciplinary material exploration grounded in extensive historical, anthropological, and sociological research. A deep appreciation for craft is paralleled by an intrinsic desire for tinkering, a tenuous relationship that in a digital world offers vast opportunities for commentary on contemporary social, political, and cultural circumstances. The democratization of technology through open-sourcing, made possible by the growing pervasiveness of the internet, produces a vast range of applications that challenge notions of freedom and accessibility. For example, file sharing and the use of 3D printers have enabled the creation of affordable prosthetics for children in developing countries. The same combination of resources has also been the harbinger of 3D printed guns. In short, the effects of the accessibility of these technologies are yet to be fully realized. The combination of digital modes of making with ceramics, a material that is inherently reclaimable, allows for flexibility with experimentation and production unparalleled by other materials.As a maker, I am motivated by this spectrum of possibility, which offers a potent metaphor in our contemporary moment. The freedom of the internet, which in spirit is democratic, is also a site where Fake News, vitriol, and uninhibited bigotry abound. Are these qualities now as “American as apple pie?” The contradictions inherent in the very nature of the digital age parallel the conundrum of American democracy, which began as a far from equal enterprise. I use my work to hold the tensions of the present up to the idealized past, specifically the era of the Founding Fathers, in an attempt to reclaim the virtues written into historical documents and imbued within cultural iconography. In their original forms, such texts and symbols make harmful assumptions about identity which only perpetuates the privilege of certain people. Through both digital and analog manipulation, as well as the mediation of machines such as 3D printers, my work endeavors to interpolate existing and well-known national iconography to expose the fault lines of the American myth.

Bri Murphy is an interdisciplinary artist, who combines digital technologies such as 3D printing with more traditional materials, influenced by their background in ceramics. Their work explores notions of American identity through the deconstruction of its mythologies – from busts of the Founding Fathers to treasured prose such as the Declaration of Independence. Bri is an active researcher and tinkerer, and has given several guest lectures and workshops, most notably at the 2019 NCECA conference in Minneapolis.

Bri began their career as an artist selling drawings to their mom for 25¢ apiece, spending their childhood years in Essex Junction, Vermont. Bri holds an MFA in Ceramics from Ohio University as well as Bachelor’s degrees in Ceramics and Art Education from SUNY New Paltz. They are the former Gallery Director at the LUX Center for the Arts in Lincoln, Nebraska and was recently an Artist-in-Residence at the University of North Dakota in Grand Forks and the Fabrication Labs Assistant Coordinator at the Nancy Richardson Design Center at Colorado State University. As of January 2022, Bri has accepted a new position at the University of Northern Colorado as Sculpture Faculty and Digital Fabrication Coordinator.