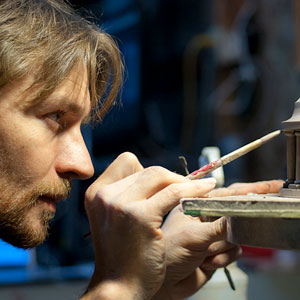 Human is to nature as skin is to bark – as roots are to veins. Humanity is inextricably linked to the natural world. Our biological patterns are echoed throughout the universe, from the micro to the macro, from our DNA to the cosmos. Yet we have created barriers between ourselves and nature. We have placed ourselves into opposition with this world that sustains us. We have become outsiders to everything that makes us who we are.

My current work explores our relationships to nature and how our daily interactions affect the fragile balance between humanity and the environment. How do we interact with and perceive the world around us? The repercussions from our persistent consumption are tipping the balance towards a bleak future that endangers our very survival. Given the unparalleled state of our technological and scientific achievements it is not only possible but necessary to find a new balance that promotes a thoughtful and sustainable relationship with nature.

With clay as my medium of choice I meticulously render by hand natural elements within our lives, taking advantage of clay’s innate ability to mimic a wide variety of materials. I utilize trompe l’oeil as a stylistic choice to enforce the concept of illusion. But, the true illusion is the world in which humanity has created. It is an existence that seeks to separate itself from nature. The juxtaposition of natural and man-made features in combination with the skewing of scale, proportion, and material, helps create an altered perception – forcing the viewer to look closer both externally and internally.

Christopher David White is a trompe l’oeil sculptor whose works are handmade predominantly from clay and rendered with acute attention to detail, often resembling decaying pieces of wood, rusted metal, and other objects in various stages of deterioration. These works explore the relationship between humanity and nature and how both are in a constant state of flux between growth and decay. He received his Bachelors of Fine Arts in Ceramics from Indiana University in 2012. He went on to receive his Masters of Fine Arts in Craft/Material Studies from Virginia Commonwealth University in 2015. He was the recipient of the Windgate Fellowship from the Center of Craft, Creativity and Design, and later was awarded ‘Most Environmentally Conscious’ at INLight 2014 hosted by 1708 Gallery. His work has been featured on several prominent art publications, including Juxtapoz, Beautiful Decay, My Modern Met, and This is Colossal. His work has been shown in galleries and museums internationally, including Daejeon Museum of Art and Suwon I-Park Museum of Art in South Korea, Abmeyer & Wood Gallery in Seattle, and Hartwick University’s Foreman Gallery in New York.