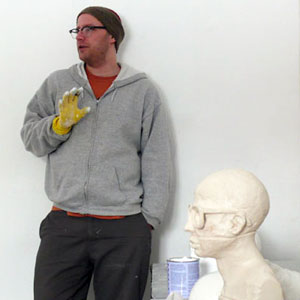 My current work explores three fundamental components of sculpture. The first is an investigation of various media and how they react to and record my actions. Pouring, pooling, bending, folding, wrinkling, rolling, hanging, slumping, sagging, dripping, draping and melting all have a unique impact when applied to metal, wood, plaster, plastic, resin, rubber, clay or wax. My studio practice is driven by a curiosity about what the results of those processes will be on different materials.

Secondly, I am interested in emphasizing my sculptures’ intentionality through replication. In repeating an action, such as successively folding three 4x8 foot steel sheets into one-foot squares, the recurring forms become something more deliberate than a record of a single process. Similarly, by duplicating a phenomenon, such as casting and reproducing a plaster drip, the work suggests a purposefulness greater than merely being an artifact of a unique event.

The third element that informs my work is the traditional architecture of displaying sculpture. Means of presentation such as pedestals, pegs, hooks and rope are integral components in my sculptures’ designs. Exhibition furniture doubles as a work surface to be poured on, draped around or hung from, and the evidence of its presence in the creation of each work remains an important part of the completed sculpture’s appearance.

My use of a material’s unique characteristics in relation to an action, replicating the resulting forms and incorporating sculptural display elements are the means through which I suggest artistic intent without relaying a specific narrative or meaning. These primary concerns provide me an avenue to investigate the properties and potentials of sculptural art and the interaction between myself, a medium and the viewer.

The first material that Chris Kanyusik sculpted with was clay. At the onset of its transition from dirt to ceramic stone, clay is runny, squishy, sticky, soft and plastic. Combined with water clay is malleable and moldable and, conversely, when exposed to air or heat it can be stiff and rigid, brittle and delicate, or remarkably resilient and hard. All of those contradictory properties exist within one medium. It is through Kanyusik’s continual experiences with clay and its characteristics at each of the above stages that he became interested in the materiality of different sculptural media, or, simply, the spectrum of physical properties that reside in “stuff”.

Kanyusik’s sculptural work is rooted in an exploration of narrative and the communication that takes place between an art object and a viewer. Beginning with depictions of the human figure, it has expanded to include more abstract, conceptual concerns in the form of repetition, replication and suggested intent. In that regard, his current work is centered on an appreciation for the physical properties of a variety of artistic vehicles, much like the malleability of clay that drew him in at the start.