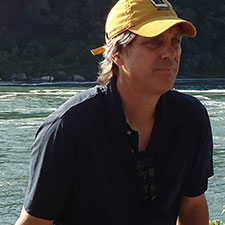 My sculptures often take the form of narrative stacks of representational objects reaching six to seven feet in height. A dialog is developed within the sculpture by integrating visual elements with strong metaphorical possibilities. Focus is often placed on endangered animals and child like doll forms. The animal and human forms are sculpted in a rough and organic fashion emphasizing their temporary and vulnerable qualities. Contrasting these elements are the hard-edged and linear portions of the sculptures, which may include medieval churches and industrial buildings that seem to grow from the animals back. I am very interested in using references to petroleum and our oil-burning world. These references may take the form of gas cans, oil bottles, and small machines with gasoline engines. Farming is also referenced through plant and food imagery. I often work with apples for their ties to original sin and biodiversity under assault, and corn, which is one of the most genetically altered and corporately controlled foods grown. The content and narrative elements vary from piece to piece. My goal for the work is to be a little like poetry with open metaphors, but I would also like the viewer who can decipher the metaphors to see my concerns about our world.