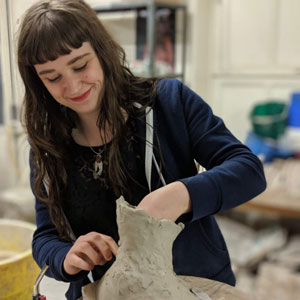 This recent body of work consists of life-size tableaus that incorporate realistic figurative sculptures and found objects in constructed scenes that are centered on private or domestic space and moments. These scenes highlight the isolation of these domestic moments and the boundary between the viewer and the private space they are surveying. I use body doubling or repeated self-portraiture as a way to explore the uncertain boundary between the real and the artificial, and the self and other. This investigation of self-actualization as well as alienation from self is a way of considering the role my own image takes as it projects outward. These body doubles are exploring the mythology of self, and the ability of iconography to encompass the unheroic or every day.I am using props and found objects in my work and am interested in creating narrative scenes that contain various levels of reality or mysticism. Using both found objects as well as tromp d’oeil sculpted objects, I am interested in creating a confusion about the layers of reality within the piece, and to have an uncanny effect on the viewer. These tableaus are a cross between a run-down suburban American interior intermingled with mystic, ritualistic elements. This work demonstrates the struggle and complexity of navigating the uncontrolled and unpredictable nature of reality, and the complicated ways that we relate to ourselves, our individualism and identity. Based in autobiographical narrative, these scenes are woman-centric and about complex inner dialogues, performance, masquerade, doubt and reflection.

Clarissa Pezone is a ceramic sculptor originally from Sacramento, California, and now residing in Bloomington IN. Her recent body of work consists of life-size tableaus that incorporate realistic figurative sculptures and found objects in scenes that are centered on private or domestic space and moments. Clarissa has exhibited across the United States in both group and solo exhibitions and has been the recipient of numerous awards and fellowships in support of her work and research. Upcoming, her work will be shown in a solo exhibition at the Indianapolis Art Center in April of 2021.