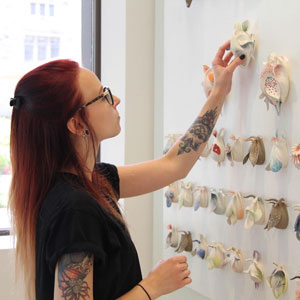 My work serves as a form of escapism to me, I’m not interested in replicating or portraying things that already exist. Ceramics gives me the freedom to create a universe of my own. A world full of strange things that perhaps don’t fit in anywhere else.

I’ve always had a very close connection with the natural world as both of my grandparents had farms so I spent most of my childhood around lots of animals and plants.

My research often delves into various insects or close ups of plant and animal word, things that often go by unseen or unnoticed. I aim to instill a sense of curiosity and wonder in the viewer - as well as explore the notion of the ‘unknown’ through unexpected combinations of shapes, colour and surface treatments. Blurring the lines between reality and fantasy, the work is intended to suggests an eerie possibility of life forms we are not aware of. Familiar yet uncomfortable, my creatures are much like unusual specimen at a natural history museum.

Daumante Stirbyte was born and raised in Lithuania in 1992, but moved to Ireland in 2007. She graduated from the National College of Art and Design, Dublin in 2016 with BDes(Hons) in Craft Design, specialising in ceramics.

She’s been an international artist in residence at the London Clay Art Centre (ON) since July 2017, where she also works as an instructor.

Since moving to Canada Daumante has taken part in numerous group shows, exhibitions and fundraisers. Her piece ‘Inflorescence’ was named Best in Show at Fusion’s 2018 Emerging artist exhibition (ON).