David Katz - "Across the Divide, Coconino Center for the Arts" 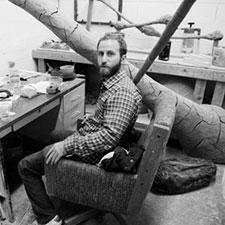 Through my installations I explore the notion of existence within a fabricated reality of constructed space. Humans have historically defined spaces of occupancy through imposed interventions into the natural landscape of constructed site, inventing environments for colonization and expansion that mediate our relationship with the natural world. While most species evolve by adapting to local ecosystems and environments, humans uniquely alter the environment to fit our needs. As a result, we exist within realities of our own construction, adapting to a world of our own creation.

My installations negotiate these ideas abstractly through intersections of organic bodily forms and architectonic constructions. The push and pull between rectilinear structures of fired ceramic and a fluid, bodily expression of unfired clay serves as a metaphorical representation of human existence within the rectilinear world that increasingly defines our physical environment.

Cage‐like structures spread throughout the exhibition space provide sites of occupancy to house biomorphic clay form, sculpted to appear contorted and trapped, yet conveying a sense of agency and free will. Order emerges as unfired clay forms expand through space as webs of organization that link disparate sites into one large interconnected network of systems. While composing these webs I take reference from road maps, patterns of urban development, architectural form, mathematical principal and biological phenomena.

As installations progress and the construction of webs come to fruition, the material nature of the raw clay reveals the temporal character of the overall system. Through the drying process of the clay, cracks develop in the webs exposing the fragile nature of the connections within the vast interconnected network presented, thus raising questions of permanence.

My hope is to create installations that explore human tendencies of colonization, expansion, and emergence of order, while allowing the material nature of clay to expose questions of permanence and sustainability.