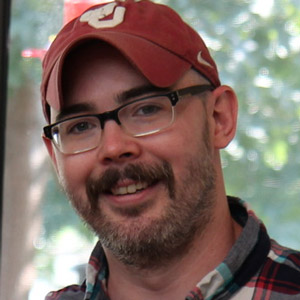 Folk art of the American South, both current and historical, plays a large role in both my research and my studio practice. The prevalence of the everyday object and the importance of the day-to-day narrative grant me the freedom and projection to include the imagery and narrative of the culture of my youth that envelop the surface of my work.

My studio practice is very intuitive, pulling images from stacks of printed sheets, looking for balance of positive and negative and noise versus rest. Reading the surface every step of the way allows the piece freedom to move in the direction it needs to follow rather than along my projected path. I leave my surfaces primarily unglazed. This has the dual purpose of letting the image take precedence and allowing paper thin slivers of porcelain to occasionally pull off the surface, communicating both the strength and fragility of clay.

The intuitive nature of my work has created a shift from vessel-based into more sculptural forms that address the buildings and walls of my youth and the response to an oil-boom town in a time of recession and the adventures and imagination of a latch key kid forming hybrids of brutalism, mid century modern and Frazetta.