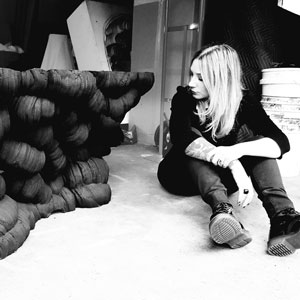 “After two decades of working as a digital 3D artist, I started sculpting with physical, tactile mediums as a means of abrupt deflection. I discovered that my background in digital spatial awareness is as applicable to the actual, the physical, the tangible. What I once constructed in digital space has now, become in my work, the application of raw, somatic materials.  I have not scrapped the old for the new.  I have heaped, rather, my capacity onto a new medium and found in it a new matrix of shape, space and feeling.

This new body of work is inspired by the desire to create unconventional forms.  Shapes that push the boundaries of the material employed.  Altering what ordinarily is the solid uniformity of concrete into casts that seem pulled, stretched, in transit.  To take the stone and make it rip, blend, emote.  To revise what is normally the process of casting the wet matrix of concrete into a solid block.  To discover instead a form that looks like a sound wave instead of a static obelisk.  A reverberation rather than an inert constant.

My aim is to create work that inspires, connects and contributes.  Work that bridges the abstraction of human emotion and solid objects.  If there is a message in my work, it is the suggestion that untamed feeling might be captured for a moment in the immutable.  A snap shot, as it were, of flow caught in an object and held in stasis.”

Deane McGahan is a contemporary American sculptor currently residing in the Seattle metropolitan area. As having grown up in the Pacific Northwest, her aesthetic sensibilities are deeply rooted in the region.  Not only as an appeal to the natural beauty at her door step, but the lived in experience of people, the effectual charge of living, which Seattle and its many haunts have afforded her.