Diane Arrieta - "MagPie Hotel"
2019, 72 x 48 x 48"
Birds are having problems with changing climates and their homes and ranges are moving.  This is an ode to vintage heckle and jeckle cartoons where they were having a hard time finding a home.

Diane Arrieta - "You Believe in Bigfoot, but not Climate Change, So I sent his Cousin to Explain it"
2023, 36 x 36 x 16"
GLOF. Harold the. yeti came to explain what melting iceberg in the Himalayan Regions are experiencing by warming climates. Glacial Lake Overflow Flooding.

Diane Arrieta - "Can We Talk About the Elephant in the Room?"
2023, Variable upon installation
Bringing the idiom to life. Can We talk about the CRITICALLY ENDANGERED FOREST ELEPHANT and it's importance to climate mitigation before they are all gone? 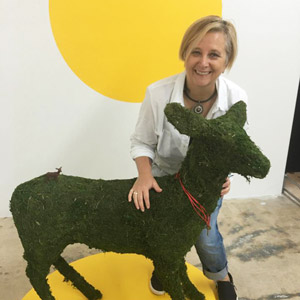 I create endearing visual allegories. My work is for those who have magic in their hearts, feel the awe of nature, have faith in humanity and defend the endangered. “If you want children to be intelligent, read them fairy tales” --Einstein I am a research-based artist focusing on biodiversity loss and human intrusion on the environment, particularly endangered species. I produce stylized, figurative work based on the psychology of the animated film genre and the neurobiology of wonderment. My work focuses on prototypicality and complexity reduction [in my character design]. These theories lead to the neurobiology of wonderment. I often employ the use of transitional objects and monochromatic color schemes in the work. Wonder is the desire to know the unknown. It consists in “never taking anything for granted”, even that which is known. Wonder helps us deal with reality and allows for new possibilities.” My installations draw you into a "play" environment, evoke nostalgia while making space for open discourse related to the science of species and ecosystem health.

Diane Arrieta was born in Clearfield, Pa and raised in Oil City, Pennsylvania. The town was the site of a Seneca Indian Village, that later became the epicenter for the petroleum industry. The significance of this rich history would have a major influence on her beliefs that eventually became the basis for her art practice.

Deeply influenced by her Native American and European Descent–Susquehanna Indian and immigrant farmers from Czechoslovakia, Arrieta’s views of nature and her stewardship of land and the environment were formed from childhood.

She holds a BFA in ceramic sculpture, but did not find her true voice until much later, when she earned an advanced degree (MSc) in Wildlife Health from the University of Edinburgh, United Kingdom. Her work focuses on biodiversity loss and the effects humans have on the accelerated population declines and over all health of animals, particularly endangered species.

Her work has been shown widely throughout the United States as well as the United Kingdom. She has exhibited in several museums, such as the Cornell Museum, The NSU Art Museum Fort Lauderdale, The Boca Raton Museum and the Museum of Fine Art Tallahassee. She has had several solo exhibitions, including the Art & Cultural Center Hollywood and Palm Beach State College. Arrieta’s awards include the coveted South Florida Cultural Consortium Fellowship Grant and the Hector Ubertalli Award for the Visual Arts. She has served on several public art committees, ran a University exhibition program, and is the founding Director of the International Humanities Project Curatorial Lab. Her main art studio is located in Palm Beach, FL., with a summer studio in Yonkers, N.Y.