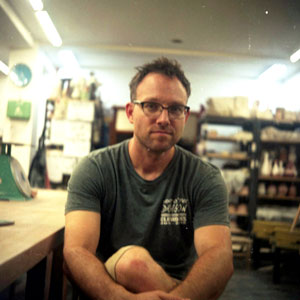 In one-off items, sculpture and production work, I am captivated by the union of craft, problem solving, ingenuity and creation when working with clay. While ideas associated with oppositions and dichotomies has and continues to be a driving force in my work, I find that the subtleties and surprises of the creative process have the most influence. Both in my thrown forms and sculpture, I am interested in the act of construction, deconstruction, reconstruction. I believe that it is this process of making that creates an understanding of the object and resulting evolution of the artwork.

b. 1980 USA. Originally from St. Louis, Missouri, Dryden Wells has spent the majority of his professional career living and working in China. Upon the completion of my MFA at Texas Tech University, he first moved to Jingdezhen, China, in 2008 to manage and oversee production of the Pottery Workshop (PWS) – Design Studio. After a year (2011-12) of teaching Ceramics at Missouri State University in Springfield, MO, he moved back to China to work at the PWS – Shanghai location. Here he had the opportunity to instruct weekly studio classes, college courses, as well as to continue the development of his own creative work. During 2016 and 2017 Wells taught a semester at Northwest College, Powell, WY and spent a year running the ceramics program at the University of West Florida in Pensacola, FL. Recently returning to Jingdezhen with Andrea Moon in August 2017, they both now Co-Direct the Pottery Workshop - International Residency and Education Center.