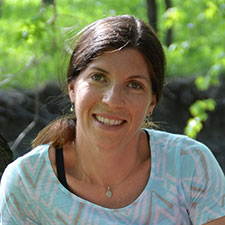 I create ceramic sculptures that are swelled, carved, and glazed meticulously. Elements of familiar domestic objects are extracted and reconstructed, allowing me to investigate not only their aesthetic qualities, but also their multiple symbolic functions within our lives. These familiar objects expand with volume becoming bulbous sensual forms that puff out of their own skin, like a pregnant belly or an over stuffed arm chair.

Snippets and sections of detailed and deliberate ornament are drawn, painted, and printed in an unabashedly blissful manner. These carefully chosen fragments and layers accumulate organically across the surface of the piece. Multiple repetitive marks represent the ticking of time. In areas these abstract patterns overflow because of their abundance or disperse like seeds in the wind. One might recognize floral motifs, snowflakes, microbes or calligraphy within the ambiguous multi-layered surfaces. I establish a sense of order, coupling overlapping lines and areas of solid color.

The sculptures are full and weighty yet parts feel buoyant, as if they could float away carrying the rest along with them. I investigate where these two realms, groundedness and weightlessness overlap, reflecting the liminal state I often feel in daily life.

Erin Furimsky is a practicing studio artist in Normal, Illinois whose work focuses on the relationship of sculptural form with highly ornamented surfaces. She received a BFA from the Pennsylvania State University (1997) and an MFA from The Ohio State University (2002). Furimsky has exhibited her work nationally with inclusions of her work in international exhibitions in China and Taiwan. Since 1997 her work has been included in over ninety group and solo exhibitions, with reproductions of her ceramic work being featured in numerous books and catalogs. Critical reviews of Furimskys’ work have appeared on several occasions in the journals Ceramics Monthly and Ceramics Art and Perception. In 2006 Furimsky was nominated and subsequently selected as an emerging artist by the National Council on Education of the Ceramic Arts. She has been the recipient of numerous artist residencies, including the Archie Bray Foundation, The Red Lodge Clay Center, The Watershed Center for the Ceramic Arts and the Oregon College of Art and Design. She is featured in a DVD called Layered Surfaces with Erin Furimsky.

As an educator Furimsky has been a featured presenter at national workshops, as well as serving as a visiting professor at Illinois State University and Heartland Community College, both in Normal, IL.