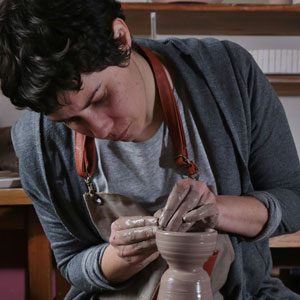 I am a ceramic artist working predominantly with clay to express concepts of emptiness through objects, structures and installations. The irreducibility of emptiness, or, to be more precise, the space that empty space takes up is an inherent problem of ceramics that I have been concerned with lately. Having worked for many years on functional objects, at some point I realized that without emptiness, functional objects could not exist. I was immediately drawn to the metaphorical possibilities of this condition, which, in consequence led to a group of nonfunctional works.