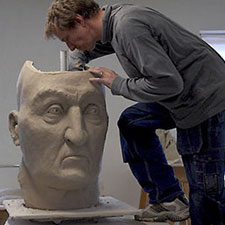 I work with portraiture. Sculptures in clay based on various themes.

I have worked on series of portraits having their starting point in notions—historical notions— about the relationship between outer appearance and inner self: in the series on Physiognomy and on the Four Temperaments, theories that seek to categorize and characterize humans based on their physical features.

In recent years I have embarked on a new body of work that specifically deals with the victims of these and other taxonomies.

I have completed a series of works on people arrested by the Gestapo in Vienna during the Second World War on "suspicion of refusal to work" or "illegal relations". These Polish and Russian immigrants found themselves in the wrong place at the wrong time.

Portraying these people, I investigate our attitudes towards the Other. The Other as stranger, friend or enemy, competitor or unwanted guest.

In my series on eugenics, I have probed the archives of the Swedish Institute for Racial Biology. Between 1921 and 1958 hundreds of thousands of people were photographed, measured, described and categorized according to "race". As late as the 1960's, people were still forcibly sterilized in Sweden for being "below par".

The aim of these portraits is to come as close as possible to the person I depict. I try imagining his or her life. But source material is often limited to a photo or two, and at best a brief description. In my work the context and sensitivity of a portrait speaks for the portrayed person. Accompanied by a descriptive title from the source material, if available.

I understate rather than shout out loud. I animate my sculptures by swabbing them with watercolor.

My work is about victims, some of whom were outsiders. In one way or another I feel connected to their fate, even though my fate might be far from theirs. There is a sense of exclusion, of being different, of being an observer rather then a participant, which forms an emotional layer in my work. And there is a fear of physical or psychological violence.

In my new body of works, "French Children of the Holocaust”, I portray Jewish children who were transported by the Nazis to Auschwitz. Only a few returned. For me this work has become crucial, since I have children myself. In spite of my horror and incomprehension, I try to fathom the fate of these children.

I want the people I portray to be seen again; I want to restore their dignity. I want their history to be evaluated by the audience. This body of work takes a stand against rising xenophobia.

Recently I have started drawing again. Large abstract charcoal drawings on paper. The emotional layers in my work are embodied here and almost made tangible.