Gina Adams - “Honoring Modern Unidentified (What Once Was)”

Ceramic Slip (made from mold of NBA Regulation Basketball), 9” Round, 2015.

Ceramic Slip (made from mold of NBA Regulation Basketball), 9” Round, 2015.

digitally embellished images from glass plate negative of my ancestor Mishugiziiguuk and Frances Densmore from 1864 that I found in my Smithsonian SARF Fellowship, printed on Epson matte paper, 20” x 20”, 2016. 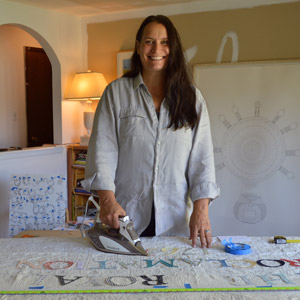 The forced integration of millions of natives is a truth that their descendants have come to know and deal with. My history of assimilation and my grandfathers forced boarding school experience at the Carlisle School is not unique. The feelings that have been passed down are now part of our genetic heritage. My current studio work deals with my ancestor’s many stories of assimilation. With each new body of work, I find it necessary to carefully choose each medium and material for each is a statement intended to bridge abstract ideas and bring them into concrete forms.

The ceramic body represents the idea of craft that would have been passed down to me by my ancestors, were their way of life and well-being not purposely divided and conquered. To ancient peoples, clay was a means of survival; here I purposely use it to signify survival that continues, despite the Dawes Act and the assimilation practices that occurred. The encaustic material on its surface is replicating my Ojibwa heritage with its beadwork patterning and birch bark “bitten” notations. I chose to start building the traditional coil pots made my by ancestors as a way of honoring what came before. To my people, honoring history is important, for necessary change does not happen intentionally unless one does so.

I chose the basketball form as a reference to assimilation, for if one is a good athlete you can be instantly accepted into any community. James Naismith was the University of Kansas first basketball coach who pioneered the game and KU's basketball program. Lawrence, Kansas is home to Haskell Indian Nations University, the only four year accredited Native American college in the United States, which was once an Indian Assimilation Boarding School. Haskell, in the Naismith tradition, has a strong basketball program for Native American athletes. Basketball is considered an extremely viable way towards survival, both monetarily and physically. It is also a way to achieve excellent educational opportunities through athletic scholarships. Choosing the basketball to make a ceramic cast of was deliberate; I wanted to bring the game into theses post- colonial issues.

I take my studio projects and its research very serious as I am doing this not only for myself but for thousands of others who have a similar story to tell. In my studio process I am deliberately looking describe, enact, translate creatively what it looks like to be from a perspective of Indigeneity. We are as a people at the cutting edge of understanding what it means now to be of an Indigenous cultural heritage. I think about these characteristics while developing my work: reclaiming history, renaming, educating, decolonizing, activating thought, recognizing perspectives from an indigenous center, and the recognition of indigenous pedagogy, and Indigenous intellect. I believe that we as Post-Colonial peoples have a responsibility to hear these ideas and move forward in creating an environment that leads toward a future that creates a foundation of respect and enduring understanding for all peoples.

I am fascinated by stories passed down, both from my own familiar heritage and those told by others. I believe that the passing down of memories is what keeps our genetic heritage alive. I am interested in, and seek out others, who have a similar story to tell, and I immerse myself in their shadows. I do so in order to tell my story more clearly, and doing so helps to clarify what I want the work to say visually.

There is a connection to what the ancient ones taught my ancestors, as this information was passed down generation to generation. I consider my work a spiritual endeavor in which the process of making is a ritual. I decided to learn how to make objects in order to have a better understanding of my ancestors and how I am similar to them. The process of making imbues my identity with an ancestral connection to the sacred and the ritual object.

In storytelling I am moved by a sense of discovery and connection, much of it deeply rooted in place and land. My life’s journey is about where the land, peoples, and stories come together. It is my wish that the viewer will add their own experience to my work. Thank you for taking the time for your own discovery, as it brings meaning to the day. Miigwetch/Thank you.

Gina Adams spent her early youth in the San Francisco Bay, and then her adolescent and early adult years in Maine. Gina’s formal education includes a BFA from the Maine College of Art and MFA from the University of Kansas, where she focused on Visual Art, Curatorial Practice and Critical Theory.

Gina Adam’s cross-media, hybrid studio work includes the reuse of antique quilts and broken treaties between the United States and Native American tribes, sculpture, ceramics, painting, printmaking and drawing. Her work is exhibited extensively throughout the US and resides in many public and private collections. The noted international art critic Lucy Lippard wrote the introduction on her artwork for her Nerman Museum of Contemporary Art Exhibition Its Honor Is Here Pledged which launched her art career and body of work Broken Treaty Quilts into a new contemporary art arena in 2015. In 2016 she was SARF Smithsonian Artist Research Fellow, and had Its Honor Is Hereby Pledged exhibitions in Boulder Colorado at Naropa University’s White Cube Gallery where she is a Faculty in Visual Arts. In the summer of 2017, Gina presented and exhibited at the AIW Conference at Goldsmiths College, University of London, England which will be followed by an exhibition at the Bemis Center of Contemporary Art titled Monarch’s curated by Risa Puleo. 2018 brought many exciting opportunities for Gina including being Artist-in-Residence at Dartmouth College which includes a Solo exhibition, a Kohler Arts Industry/Residency and several more.