Guillermo Guardia - "Cachito/Croissant Warrior"
2020, 12", 8", 16", Media: Stoneware, Firing Process: Electric, Mid-range, Oxidation, Surface: Engobe / Slip / Underglaze, Glazed
Croissant Clay Warrior: The main figure is a continuation of the Baby Devils series back to 2003-2004. I was raised catholic and started questioning all I learnt from the Peruvian catholic church when first arriving in Grand Forks ND, 2002. I tell my friends I still have the catholic guilt though. The figure of the baby devil started as a reaction to the Iraq war but also a response to what I was taught by the church. In the last years the baby devils have evolved more and more into a representation of myself. A few years ago I started to cover the figures with Mochica designs. Mochica is one of many Peruvian Pre-Colombian cultures that flourished in Peru. I am originally from Peru and have admired Pre-Colombian art since childhood. In the last year the baby devils continued to change more to look like Japanese anime characters. The Japanese anime influence is not just aesthetic but symbolic. I am Peruvian with part Japanese, my grandpa on my mom's side was born in Japan. When the pandemic started the clay studio closed for nearly 3 months. I couldn't work in clay for that long. Instead I got into baking sourdough bread. Working the dough is very similar to working with clay. It was actual therapeutic to bake. I had baked bread before the pandemic, but during the lock down I got pretty good with baguettes and then croissants. It was my way to deal with this new form of living. These baby devils have croissants ammunition belts, they shoot croissants. 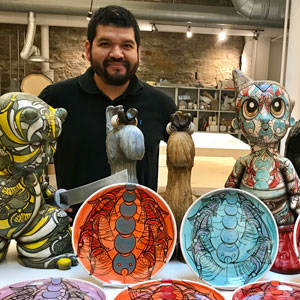 My artwork explores political and social issues relevant to my personal experiences, informed by the events in my life and the places I have lived. My process is intuitive and responsive. This is my story…I was born in Perú and have lived in The United States since 2002. As a child, one of my favorite toys was plasticine/oil clay. Like any other kid, I loved to watch cartoons, many of them created in Japan and translated into Spanish. I spent hours playing with plasticine recreating my favorite cartoons and creating my own action figurines. Since then, those Japanese cartoons have been a great influence in my artwork without even realizing it.

I have always admired Renaissance art, and in recent years I also perceive a stronger connection of my art with my Peruvian heritage: ancient pre-Columbian cultures like Mochica, Wari or Inca; and to my Japanese heritage (my maternal grandfather was Japanese).

One year after I began my degree at University of North Dakota, the war in Iraq started and I thought I should make something about it. At the time I was experimenting with Raku firing. When I saw the fire, flames and smoke coming from my work, it conjured up images of hell, as it looked in my mind, possibly as a result of being raised Catholic. I decided to apply the firing process to an actual ceramic figure. I began sculpting very realistic and stereotypical demons with long tails, pointy claws, horns and bony bodies. However, they were too fragile to stand the thermal shock. I needed to find a stronger form. I thought about using either overweight or newborn figures. In the end, I chose to create babies. The newborn and devil figures combined the duality common throughout the world; man and woman, fire and water, day and night. In this case they are babies and are supposed to be pure and free of sin (another lesson from Catholicism and the original sin), but they have little horns and are mischievous. Back then I began coloring the baby devils as if they were wearing military camouflage and gave them weapons. Each one was different. I thought of them as playing hide and seek, finding each other to shoot and kill.

Simultaneously I began working on what would be the puzzle sculptures series. After building numerous human figures in clay, I concluded I was failing at creating the figure I had envisioned. This was very frustrating. It left me unsure of what direction to take my artwork.

My frustration was compounded by the fact that it was my first time in the United States, and my first time out of Perú. Everything was new for me. I had problems communicating with my peers. Some days I went home with painful headaches.

Back then I sat in front of one clay figure I finished, contemplated for a while, took a carving tool, and began to draw some lines over the surface. Eventually those lines crossed each other and became patterns. It made the figure look as if it was built of individual pieces, becoming the inspiration for my puzzle piece series. Most of us have felt the sensation of something missing and not knowing what it is. We have felt that uncomfortable feeling of emptiness and are unable to describe it. Life is difficult and complex. The puzzle pieces represent those little parts of everyone’s life and shape us as human beings.

Both series, baby devils and puzzle sculptures, have changed and evolved, the baby devils in particular. They have elements that identify with my Peruvian-Japanese heritage. They are covered in Mochica designs and can be holding one or two samurai swords. This cultural mixture is also present in my functional ceramics, in which my forms are influenced by the Japanese tea bowl and covered with Mochica designs.

The idea of making art about immigration also started during my time in Grand Forks, North Dakota, and has slowly transformed into art installation and public art. The town of Grand Forks is located in the eastern edge of North Dakota, and borders East Grand Forks, Minnesota, separated by the Red River of the North. Two towns, two states, separated by a border and a river. I thought the location was right to work on a public art installation about immigration: Crossing the border.

Three years ago I was awarded a city art grant and was able to create more than 300 small clay figurines. The vast majority resembled little kids, girls and boys, running. They were installed first on the downtown bridge’s railing and later on the riverbanks near the bridge. They looked as if they were running from one town to the other; they were crossing the border. All were different bright colors to represent diversity. The clay kids were crossing the border and running away from fat clay coyotes on one side of the border and ambushed by more fat clay coyotes as they crossed to the other side. The fat coyotes are a reference to another immigration artwork I did with llamas. Some farmers in the States have llamas to protect their sheep against coyotes. According to them, llamas are very effective. Llamas are not originally from North America but from the Andes. They were brought here for a purpose. In that sense llamas are immigrants, as I am. I make llamas as a symbol of immigration; they look angry but playful and whimsical.

I moved to Saint Paul in 2017, Minnesota, and soon after started working in a new idea and series about the meaning of home. I visit Perú once a year, but recently it feels different. In the last years visiting Perú doesn’t evoke the same emotional response as it did years ago. I lived in North Dakota for 15 years and I thought of it as a second home until the end of 2016. Then I made the decision to move. I am new to The Cities and plan to stay for a while, however is too soon to call it home.

Today, when I think of home it is not more a current physical location and beloved relatives. Home has become a recollection of memories, in particular memories from my childhood, when I spent most of my time at grandma’s house along with my brother and sister and numerous cousins. Both of my parents were young, strong and alive then. (My dad passed away three years ago.) I began to present those memories through sculptures of TV show characters from my childhood during late 70s and early 80s. I choose to represent Japanese characters and cover them with Mochica designs.

This series of Memories of Home and the Baby Devils, Puzzle Pieces and Immigration series were on exhibit during NCECA 2019.

Guillermo Guardia is originally from Lima, Peru. Guardia received his BFA in industrial design from Pontifical Catholic University of Peru in Lima, and both his MFA in ceramics and MS in industrial technology from the University of North Dakota in Grand Forks, North Dakota. He worked at the North Dakota Museum of Art as artist in residence until 2015, when he resigned to become a full time studio artist.Guardia currently lives and works in St. Paul, Minnesota. He creates figurative sculptures, integrating pattern and form, which are influenced by art history, his upbringing in Peru, Catholicism, his transition to living in the United States, and political events. Guardia has exhibited nationally. His work is featured in the permanent collection of North Dakota Museum of Art in Grand Forks, North Dakota, and Fundación Puntos de Encuentro in Bogota, Colombia. Guardia was awarded a 2019 McKnight Foundation fellowship for ceramics artists and is a fiscal year 2020 recipient of an Artist Initiative grant from the Minnesota State Arts Board.