Habiba El-Sayed - "Would I have called you Teta?"
2017, 6' x 6' x 2' , Media: Mixed Media, Porcelain, Firing Process: Unfired, Surface: Unglazed
This piece consists of multiple short performances and involves the pouring of tea on unfired clay cookies as a way to explore cultural and familial loss.

Habiba El-Sayed - "Would I have called you Teta? (detail)"
2017, 6'x 6'x 2', Media: Mixed Media, Porcelain, Firing Process: Unfired, Surface: Unglazed
This piece consists of multiple short performances and involves the pouring of tea on unfired clay cookies as a way to explore cultural and familial loss.

Habiba El-Sayed - "What's it worth?"
2017, 14"x 12", Media: Stoneware, Firing Process: Electric, Oxidation, Surface: Glazed, Lustre
Part of a 6-piece installation in which works could only be viewed through a peephole. The work considers pigeonholing and the 2-dimensional, voyeuristic way Muslim women are represented in media.

Habiba El-Sayed - "Weight of Apology (Day 8)"
2016, 15' x 3' x 3' , Media: Stoneware, Firing Process: Unfired, Surface: Unglazed
This piece was performed for one hour everyday for eight days. Audio of newscasts post-911 plays at varying volumes, dictating the speed and urgency in which the structure is built. The artist examines the unfair expectation to denounce terrorism placed on the Muslim community, and how the pressure to rebuild leads to eventual destruction. 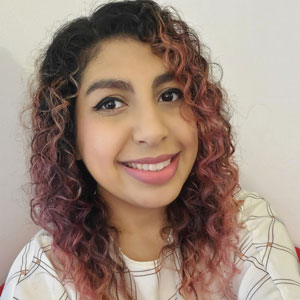 With performative, durational, and sculptural works, Habiba El-Sayed’s interdisciplinary approach to ceramics highlights ephemeralness and materiality while negotiating aspects of her identity as a Guyanese-Egyptian, Muslim woman living in North America. Exploring the way marginalized people see themselves, the world and how the world sees them in return, her work is ultimately about perception. Both historically and contemporarily, El-Sayed considers the power dynamics of the gaze and the lasting impact of the often-distorted portrayals of Muslim women and people of color. Challenging the confines of misrepresentation, her work is a celebration of body autonomy, nuance, and resilience.

Inspired by Islamic architecture and human vulnerability, Toronto-based interdisciplinary artist Habiba El-Sayed uses a variety of materials, performance, and temporal techniques to illustrate her concepts. Her work focuses on connecting to, exploring, and interpreting aspects of her identity. Habiba holds an Advanced Diploma from Sheridan College in Ceramics (2014) and a BFA in Ceramics from the Nova Scotia College of Art and Design (2016). She recently completed a three-year residency at the Harbourfront Centre in Toronto (2019). El-Sayed’s work has been shown in galleries and museums across North America and she has been featured in publications such as Fusion Magazine and Studio Potter. She currently creates out of Clay Space studio in Toronto’s East End and post-pandemic will return to the position of Pottery Technician and Instructor at Markham Museum.