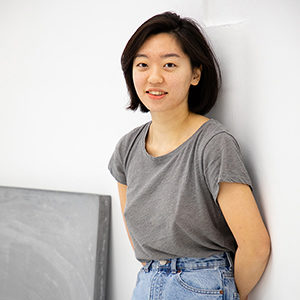 My work is an active research of building extractive forms; furthermore, a nonlinear narrative study that develops dimensions, fragility, and aggregation through hand made processes. Its repetition is an act based on curiosity, of multitude and of habit while the approach is outwards, whimsical and rhizomatic. Using mold-making processes and techniques, these objects propose a methodology that enjoys invention in transition. Forms, often in series, become evidence of the making process. They resemble the past and the future but are unlike both. In this continuous form-finding, I tend to build relationships between new origins, thoughts, and contradictions.

Objects I create are casts of fragmented molds and exaggerated abstractions of the same. Molds—historically used to as voids—transform their behavior to now an engaged cast. Here, the residues, leftovers, remains, and remnants, which were once valuable parts in the context of one process no longer holds the same ideas, function, nor value once they are removed from its process. I celebrate these autonomous outcasts through the act of casting; which for me is an act of acknowledging the disappearance by preserving its meaningful parts. They are exhaustedly performed in repetition to create layers that grow in volumes, masses, and spaces; becoming ambiguous exaggerations of self. The environments of making inevitably become a resource for further exploration. In this habitat, all objects are artifacts of investigation. Importantly, its a physical documentation that viewers witness through the study in each piece as a beholder of another.

Hae Won (first name) Sohn (last name) is a visual artist and craftswoman living in Baltimore, MD and working between Washington DC, Baltimore and New York City. She is a 2018-2020 long term resident artist at Baltimore Clayworks and Adjunct Professor of Ceramics at Corcoran School of the Arts and Design at the George Washington University. Coming from Seoul, South Korea; Sohn earned her Bachelor of Fine Arts degree in Ceramics from the College of Design at Kookmin University and her Master of Fine Arts degree from the Ceramics Department at the Cranbrook Academy of Art, Bloomfield Hills, MI.