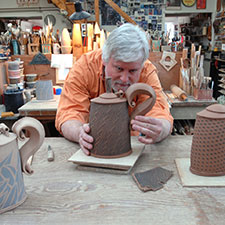 The techniques of hand-building – extrusions and slab construction – let me take advantage of clay's power to capture gesture. I'm intrigued by what happens when clay is stretched, pressed, incised, inlayed, rolled, bent, cut and put back together.

The pots are not so much about balance and harmony but more about tension. I love what spawns in the friction between what I'd like the material to do and what it would rather do.

The unintended result, often misread as a mistake and so dismissed, is one of the most fertile sources of new ideas. The trick is not to fool with clay's inherent desire to be expressive. It will offer – or impose – its own ideas about new forms and ways to work.

I keep in mind what Constantin Brancusi wrote in 1927:

“Each material has its own life ... we must not try to make materials speak our language, we must go with them to the point where others will understand their language.”

Hayne Bayless is a studio potter in Ivoryton, CT. Other than lessons from a potter in Tokyo when he was 19 and later a handful of classes and workshops, he managed to avoid any formal instruction in ceramics.

He abandoned wheel-throwing early on, preferring the freedom of handbuilding afforded by slabwork and extrusions.

Hayne’s interest in clay started in high school, where he discovered an old potters wheel and kiln gathering dust in a corner of the art room. The art teacher pointed him to Bernard Leach’s A Potter’s Book, which became his guide. After a college career that spanned four schools and seven attempted majors over 12 years, Hayne emerged with a degree in journalism. He worked as a newspaper reporter and editor in New Haven for 10 years.

His interest in clay reemerged, and making pots began to take up most of his time outside the newsroom. He quit the paper in 1992 and several days later put out work at a church-yard craft show, where he sold three pieces.

Hayne has had the great fortune to be awarded the top prizes at two of the country’s most important craft shows: the Smithsonian Craft Show in Washington, D.C. and the Philadelphia Museum of Art Craft Show. He teaches workshops all over the country and abroad.