Horacio Rodriguez - "Bad Hombre (con las flores)"
2019, 10 X 3 X 12, Media: Earthenware / Terracotta, Firing Process: Electric, Surface: Glazed, Image transfer / Decals / Screenprint
This piece is based on a Pre-Columbian head fragment from Western Mexico. The original artifact was 3d scanned and printed. I then made a mold of the print, and slip cast it in terra-cotta. From there I glazed the form and applied decals.

Horacio Rodriguez - "Designer Head fragments (white-washed and branded series)"
2019, dimensions variable, each head is approximately 16 X 4 X 18, Media: Stoneware, Firing Process: Electric, Surface: Glazed, Image transfer / Decals / Screenprint, Lustre
These pieces are based on a Pre-Columbian head fragments from Western Mexico. The original artifacts were 3d scanned and printed. I then made molds of the prints, and slip cast it in terra-cotta. From there I glazed the form and applied decals and luster. 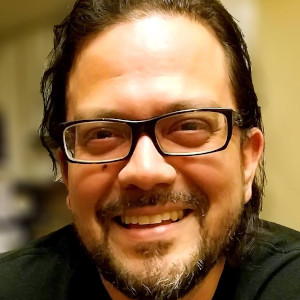 Horacio Rodriguez is an artist and educator originally from Houston, Texas. As a teenager, he spent his summers wandering the streets of Houston’s Museum district and taking classes at the Glassell School of Art; this inspired him to dedicate himself to a career in the arts. He majored in photography before finally finding his true passion: ceramics and sculpture.

Horacio says about his work, “My work is about the many borders I have crossed in my life. I carry many of these borders with me in my memories and produce work about these physical and psychological borders. As a product of multiple cultures and identities, my art is used as a vehicle to explore the creation of my personal narrative within the hybrid cultures of the borderlands”. Horacio has shown his work extensively; He recently won best of show in the international exhibition, Clay on the Wall, sponsored by Texas Tech University and displayed at the LH Underwood Center for the Arts. He was also recently included in Contemporary Clay which was displayed at the Western Colorado Center for the Arts, as well as Site Lines, The University of Utah’s Art Department faculty show at the Utah Museum of Fine Arts.