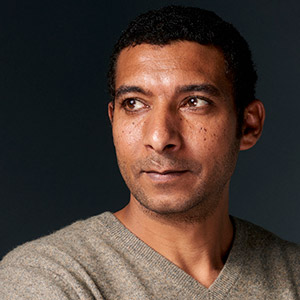 I am interested in expanding on forms and principles rooted in my culture: namely ancient Egyptian pottery and the use of geometry in Islamic arts. I hope to bridge the languages of function and sculpture, from the ancient to the modern, and create a dialogue between the beauty of what the past teaches and the need to move forward and innovate, while continuing to speak to quintessential relationships of balance and harmony.

From the narrow streets, pottery ovens, and noisy workshops of Fustat, Ibrahim Said was born in 1976. Fustat is an area in Cairo, Egypt that has etched its name in the history of the pottery industry since the Islamic conquest. Ibrahim comes from a family of potters, and his father became his first teacher and the rich cultural heritage of Egypt became his second.

Known for his elegant vases that are included in some prestigious Middle East collections, Ibrahim’s work is inspired by the ancient work of Egyptians- the strong lines and bold shapes- although his signature work embodies a lightness that comes from his silhouettes, small bases, and delicate finials.

His carvings are derived from Islamic jug filter designs, which were both functional and aesthetic. The carved area in the neck of the jug filtered out impurities when water was collected in the Nile. Ibrahim wanted to find a way to bring these ancient carvings back to life while somehow maintaining their history.

He has participated in workshops and demonstrations throughout the Middle East, and has been highly recognized for his technical ability, creativity, and innovation in the field of ceramics.

In 2011 he married an American artist and now splits his time between Greensboro, North Carolina, USA, and Cairo, Egypt.