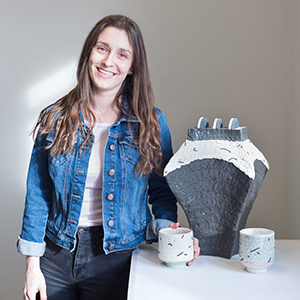 Bridging language and poetic suggestion, my work functions as visual poems of communication. Each element - a sculptural skein drawing a precariously balanced structure a lattice serving as a screen – is a stanza, a necessary part to understanding the full sculptural poem. These compositions of repeated elements are driven by my desire to address visual and emotional notions of memory, time, and fragility.I utilize a primarily monochromatic color palette in my sculptural assemblages. I have established my own peculiar theory of colors that affects my conceptual and formal decisions.White is emptiness. It is a beginning, waiting patiently to uncover the endless possibilities that await it.Black is strength. It’s the end of the day, a journey fulfilled.Desaturated pinks and yellows suggest the memory of a feeling or thought. Bleached by the sun’s rays, the vibrancy of their color is now a memory.The clay’s color is prominent in compositional elements such as the sculptural knots that I refer to as skeins. The skeins are pink, yellow, black, and white moments that fill the lattices. Their amorphous silhouettes introduce a nonlinear element that challenges the visual cadence of the structured groupings. They are three-dimensional drawings. Drawings of memory. Drawings of time. Their forms are curving, folding, stretching and retreating. I place the skeins one by one in the lattice structures. Although seemingly intuitive, the arrangement is controlled. My specificity when composing elements stems from my desire to control a moment, thought, or memory while accepting the inevitable loss of control that defines existence. My work is an exploration of possibility and the transformative power of time. My fascination with the malleable nature of memory is translated into vignettes that reside in the liminal space between solidity and fragility. Their rigidity, structure, and stillness is directly linked to my desire to create monolithic forms that seem solid and lasting but that are as susceptible to changing understanding and interpretation as the cultural monuments that mark my upbringing.

Iren Tete is Visiting Faculty at Alberta University of the Arts in Calgary, Canada. She received an MFA from the University of Nebraska-Lincoln in 2019. Iren attended the College of William and Mary (Williamsburg, VA) where she received a BS in Kinesiology and Health Sciences. She equally calls Sofia, Bulgaria and Washington, D.C. home. Iren has received multiple grants that have supported her practice and research. During the summer of 2018 she was able to further her study of Brutalist theory and architecture through a residency at the Zentrum fur Keramik in Berlin, Germany. Iren has also completed residencies at the University of Cincinnati (Cincinnati, OH) and the Northern Clay Center (Minneapolis, MN).