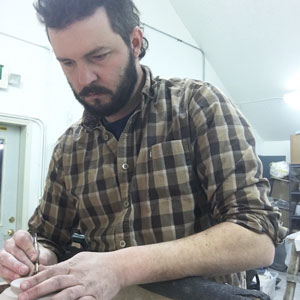 My work is a material articulation of the relationships, origins, and roles of functional objects and their interactions between landscape and utility. Utilizing a vocabulary of functional ceramic objects, my work explores material and process as a vehicle to articulate relationships between object and containment, body and environment. Through the use of landscape and process residues I seek to connect the viewer to the transformation of material into object.

Integral to my studio practice is the development of layers of information contained within the work. I am interested the interactions between pattern, chance, accumulation, and erosion to enrich surface. Surfaces serve as a record of an object’s history materially containing the residues and interactions of time and process, which operate as indicators of transformation. Through implied function and familiarity of form, I want my work to exist as an object of utility and as a record of activity. This oscillating focus between what the object does and what the object records, invites the viewer to consider their relationship to both.

I am interested in relationships to environment and landscape, where objects function as landscapes, and landscapes function as objects; inviting contemplation of the actual roles and origins of the objects we encounter. Residues are built over time and are indicators of origins, form and surface become interconnected through time and processes, surfaces are dictated by form and process; processes and residues accumulate to create new form.

and the history of the object.

James Tingey is a studio potter whose work explores ideas of utility, process, material and landscape. His work incorporates a straight forward visual language to address function, and the vocabularies of utility and wood firing to investigate the intersection of processes and control. Currently, James is Resident Coordinator and Studio Technician at LH Project in Joseph, OR. Prior to LH Project, James was Instructional Associate in Ceramics and Sculpture at Brookhaven College in Dallas, Texas.

A native Oregonian, James received his Master’s of Fine Art with a concentration in Ceramics from Ohio University in 2012. He has exhibited his work widely in over 60 nationally juried and invitational shows, and received awards from Strictly Functional Pottery National, Clemson Ceramics National Exhibition, and Studio Potter Magazine. James has been Visiting Artist at Lane Community College, Kendall College of Art and Design, University of Kansas, and Louisiana Tech University, and a Presenter at 2016 Waubonsee International Woodfire Conference, and 2017 NCECA Conference, in Portland, OR.

Previous to attending graduate school, James was a studio potter in Oregon exhibiting his work in craft shows along the West Coast, including The American Craft Council show in San Francisco and OPA Ceramics Showcase (the largest all-clay show in the United States). He completed a yearlong residency at Galeri Estudi in Barcelona in 2003, and Pleasant Hill Pottery in 2012-2013. His work as been featured in Woodfired Ceramics: 100 Contemporary Artists, 500 Cups, and 500 Teapots: Volume 2, both by Lark books, the 2011 NCECA Journal, and Ceramics Monthly Magazine.