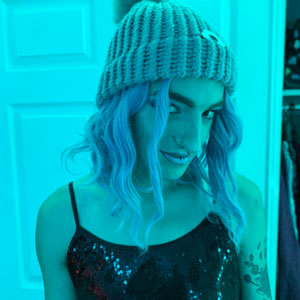 Jasmine Fetterman uses a multi-disciplinary and research based approach to explore the complex and fluid nature of identity as a universal concept throughout humanity. As an Eastern European,  first generation American, they reference themes of western histories, mythologies, and aesthetics to explore politics of the queer body and its relationship to constructed space. Their desire is to create space to  include and normalize queer bodies within film, media, and the art world. Focusing on the necessity of a utopic liminal/transformational space that they have labeled as queer architecture, to also question/critique the role of socio-economic class, gender structures, and hierarchies. They have shown around the West Coast, Pacific Northwest and the Southwest, most recently at the Henry Museum in 2021. They hold an MFA from the 3D4M program at the University of Washington completed in 2021.

I am a transgender artist that grew up on the penensula of Washington in the Pacific Northwest. There is a subtle yet undeniable elegance that exists within this landscape that helped shape my understanding of beauty and the world, and is the place that I have come to call home. When I started making art I was continuing a search for something that I had been searching for my whole life, though at the time I didn’t know where it was headed. Over the years my work has existed as a place and a framework for me to explore identity and sexuality. The understanding of what this body of work represents has shifted and altered over the years as a fluid, ephemeral thing changing as my understanding of my identity has grown stronger. I love my family dearly and I have so much gratitude for the way they raised me, but being gay not to mention transgender was something that was not acceptable and was kept hidden from them and myself a lot of my life. As the practice has progressed, more of the secrets that I had held close or didn’t even know I had, were being exposed and released into the world. Culminating at this point within my practice and the end of graduate school as a pretty ridiculous coming out story. I have been reunited with an old self as I begin this second life as Jasmine, or Jazzy as I like to be called.