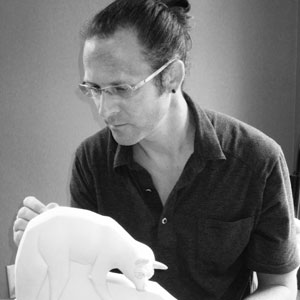 In my ceramic sculpture, I have been exploring how technology has influenced and molded our perceptions of nature. Yet, what is nature exactly? What image is conceived with the word? If typed into a google search, nature is defined as “the phenomena of the physical world collectively, including plants, animals, the landscape, and other features and products of the earth, as opposed to humans or human creations”. This description of nature excludes humans and human creations from nature. It creates two very separate worlds – the human made world and the non-human made world. How have we, human beings, arrived at such a perception of ourselves and nature? Part of an answer lies within the arena of ‘human creations’ - or Technology.

Technology is a major tenet shaping ideology. It alters the structure of our interests, it alters the structure of our symbols, and it alters the structure of our community. For example, long ago I decided to ride my bike from Vancouver, Canada down the U.S. coast with a sharp left turn in Oregon leading back to southeast Idaho where I grew up. The ride took one month. As my metric of travel was an automobile up to that point in my life, time and space became farther and longer with a bicycle as my new tool of measurement for travel. Sixty miles was an all day effort instead of an hour on the highway in a motorized vehicle. Just as the bicycle changed my relationship to time and space, human beings will perceive the world differently according to the tool they are using, and behind every technological creation lie unintended consequences and underlying messages that forever change our perceptions, social interactions and our relationship to each other and nature.

The way we perceive nature speaks volumes about the way we perceive ourselves and what it means to be human at this precise moment in history. A place that embodies our most ideal perception of nature is wilderness. Speaking of wilderness William Cronon wrote, “For Americans wilderness stands as the last remaining place where civilization, that all too human disease, has not fully infected the earth. It is an island in the polluted sea of urban-industrial modernity, the one place we can turn for escape from our own too-muchness.”

Paradoxically, from our ‘own too-muchness’ our ideas of wilderness and nature are conceived. Thus, I have come to realize my own appreciation for nature has come from the culture of which I belong, because all we think and perceive, or think we know, is constructed and mediated through signs – or language. Ultimately, ideas of nature and/or wilderness are human constructs ever changing through human cultures at different moments in history. It is time to rethink our perceptions of nature, culture, wilderness and civilization, and perhaps we may once again reinstate our own naturalness and one day find balance between the planet and ourselves. In doing so we may come to a better realization of what it means to be human at this present time.

Jason Walker was born in 1973 and grew up in Pocatello, Idaho. He received a BFA from Utah State University and a MFA from Penn State University. After schooling he taught for two years in Napa California but quit teaching to pursue life as a studio artist. He spent two years as a resident at The Archie Bray Foundation for the Ceramic Arts, where he was the recipient of the Taunt Fellowship award. Since then, he has lectured, taught worked and exhibited extensively nationally and internationally in places including the Renwick Gallery at the Smithsonian Institution in Washington D.C., Haystack Mountain School for the Crafts, Penland School for the Crafts, Anderson Ranch Arts Center, The Pottery Workshop in Jingdezhen, China and the International Ceramics Workshop, Kecskemet, Hungary, South Korea, Ireland and France. He has been awarded a 2009 NCECA International Residency Fellowship and a 2014 Artist Trust Fellowship from Washington State. He has work in major collections such as the Fine Art Museum of San Francisco: De Young, the Carnegie Mellon Museum in Pittsburgh, Pennsylvania, the Arizona State University Art Museum Ceramic Research Center, Tempe, Arizona and the Portland Art Museum in Portland, Oregon. He is represented by Ferrin Contemporary, and currently resides in Kona, Hawaii.