Jenny Hata Blumenfield - "The Vessel as Female (Installed for the Clay Biennale at The Craft Contemporary)"
2019, 48 in x 48 in x 65 in, Media: Stoneware, Firing Process: Mid-range, Surface: Glazed 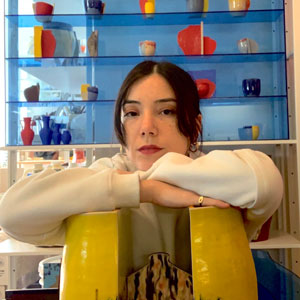 I grew up as a half-Japanese and half-Jewish woman identifying individual. Through my ceramic and lucite sculptures, I am interested in bridging these identities to create forms that are significantly more representative of the “melting pot” or liminality in which I grew up in. In referencing the “in-between” of cultural and racial identity, I am interested in materializing the “in-between” through the hybridizing of categorizations such as craft, design, and conceptual art. This limiting framework does not bring into focus the nuanced complexities of identity in our fluid present. While traditionally perceived as singular and separate, it is the crucial bridging of these identities and categorizations that help to carve out generative spaces for contemporaneity and new possibilities of inhabiting, in identity and sculpture alike.My sculptures materialize notions of the feminine through the symbolic language of the vessel, building upon and challenging the existing connotations of the vessel as a traditional form. Significant in its bodily and functional characterization, the vessel becomes the framework for the feminine body to explore themes of multi-cultural erasure, objectification, and the duality of perspective. I use playful language, that of metaphors, idioms and ideograms, through the use of silhouettes and titles of works, to carefully craft spaces of communication, commonality, and holding to speak to the “in-between".

It is within these sculptures that I can begin to reclaim by honoring the historical past with a more integrated present. The sculptures suggest new ways of embodying the in between, with each component deconstructed, subverted, and then pieced together into something of its own. It is how the individual looks through the lucite lens (a lens that provides clarity, refraction, illumination, and transparency), where the tactile density of ceramics and their conceptualized ceramic counterparts begin to lend themselves to a conversation that reconstructs existing dialogues. Through these sculptural interventions, I hope to reveal how our perspectives are differing but not othering, conveying a narrative that holds space for the uncategorizable.

Jenny Hata Blumenfield (b. 1988) graduated with Honors from The Rhode Island School of Design with a BFA in Ceramics. Previously seen at venues including Christie’s Auction House in New York; The Hole in New York; Mana Contemporary in New Jersey; and The Craft Contemporary in Los Angeles, CA. After more than a decade of living and working in New York, she has returned to her hometown of Los Angeles, CA where she now resides.