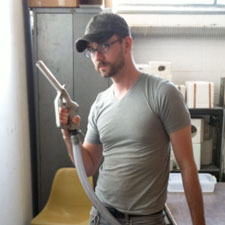 There is a space that exists upon the tip-of-the-tongue, one characterized through a sense of elusive certainty. Taste aside, it is concerned with imminence and inaccessibility, language and memory. Sometimes the first word out of our mouth is hardly a word at all, but rather this inarticulate sound that is more closely related to what we would identify as gesture. Suspended, held at the cusp of verbalization, there is something there and you feel it strongly. It is a haunting moment; it is a structure of feeling. The investigation of such a quality, one that is (at times) more properly sensuous than cognitive in its scope and depth of inquiry, is one at the core of my work and studio practice.

Jeremy R. Brooks was born in Detroit, MI. He received his BFA in art and design from Grand Valley State University in 2001, and his MFA in ceramic art from Alfred University in 2007. Some of his honors include a one year residency at The Clay Studio in Philadelphia, PA, receiving the emerging artist award by the National Council on Education for the Ceramic Arts (NCECA), and being selected as a guest of honor at the XXIst International Biennial of Vallauris, France. Brooks is currently an Assistant Professor of Ceramics at Coastal Carolina University and resides in Conway, SC.